Guards at a prison in northeastern Brazil were on their toes on New
Year's Day when they spotted someone suspicious entering the facility.
They detained the individual for questioning, however, the detainee was 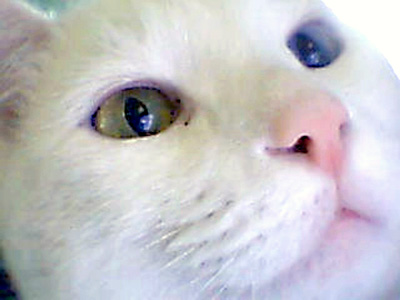 White Cat (Public Domain Image)unwilling to respond and limited his/her comments to a simple and
non-committal "meow." Authorities are continuing to investigate the
incident.

The guards initially grew suspicious of the stranger when they noticed that the infiltrator was a white cat with a large amount of duct tape around its midsection. They intercepted the intruder and a strip search that had to hurt turned up a cell phone and a saw. The felonious feline was also packed with drills, an earphone, a memory card, batteries and a phone charger. The cat was unable or unwilling to identify who had strapped the items to its body and sent it into the prison.

The plan might have worked better if the masterminds behind it had not sent the cat to the main gate where it was immediately intercepted.

All of the 263 prisoners in the facility are suspects in the plot to attempt escape. Everyone in the surrounding city of 215,000 residents is also suspect. The police have a monumental investigation ahead of them.

The cat has since been sent to an animal disease facility for medical treatment.