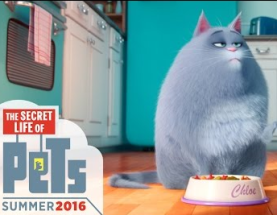 ‘The Secret Lives of Pets’ will be a blockbuster when it premieres in the summer of 2016 if our fascination with Internet cat videos are any indication. According to a recent Forbes’ report, “60 of the best Internet content involves videos of cats being cats.”

Even a Fortune 500 the likes of General Electric sees the value of including a ‘cat’ reference on one of their recent TV commercials, now viewable on YouTube.

Yes, while the fictional app ‘Zazzies’ makes fun of of a software application that applies funny hats to cat videos and Gifs, the fact is, their advertising department was savvy enough to know it would resonate with the millions watching their commercials.

In a post I wrote back 2012, titled, 'Cats Whose Futures So Bright They Have To Wear Shades,' I noted that “cats are a such a "win-win" when it comes to the Internet, one has to ask themselves, how can businesses benefit from the seemingly never-ending trend?”

Well, this yet-to-premier movie is a prime example — as I'm sure the movie's promotion team will find a number of ways to increase demand, by tapping into that zeitgeist when promoting it. Today's online cat-frenzy is going to be a major selling point for The Secret Lives of Pets even if it includes a token pet dog or bird intermittently.

For their fifth fully-animated feature-film collaboration, Illumination Entertainment and Universal Pictures will debut The Secret Life of Pets, a comedy about the lives our pets lead after we leave for work or school each day.

The Real Secret Life of your Pets Revealed

The ‘cat video’ movie to top all cat videos also suggests a question that many a pet owner has pondered over the years — namely, ‘what does my pet do throughout the day, when we're not a around?’

Well, inventor and pet owner Dave Evans appears to have the answer, with a tracking device he initially dubbed the ‘Cat Nav,’ but is now being marketed and sold as G-Paws. 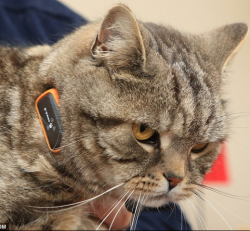 YalloThe device tracks the every move of pets and maps it all out on Google. Father-of-two Dave Evans came up with the idea because his own silver tabby Yollo was mysteriously disappearing and putting on weight each day.

So to track her covert moves when he wasn't around, his ultra-light GPS tracker is affixed to her collar. The device is weatherproof weighing just 15g, and can be used for both cats and dogs.

Then periodically when Evans wants to check out her whereabouts, all he has to do is download the data with a USB connection to his computer. The results appear on Google Earth satellite map.

And in case you’re wondering about Yallo's mysterious weight gain, it appeared that this cat had a particular fondness for chasing chickens at 6am every morning. Whether or not she snagged any for her morning repast is still conjecture.

However, if Evans truly wanted to learn all the facts, I’d suggest he attach a Go-Pro camera to his G-Paws tracker to really learn about the secret live of his pet. Not a bad idea, eh cat-lovers?

A New Toy? The Animal Video Of The Day!!!
The Best Christmas Gift for a Dog-- EVER. The Bonus Animal Video of the Day!!!

If Animals Ate Fast Food -- The Funny Animal Video of the Day!!!

Laser Bird! The Animal Video Of The Day!!!
Comments