The Case Of The Missing Mistle Thrush

In the United Kingdom the RSPB's annual Big Garden Birdwatch is taking
place this weekend. One of the birds that the organization is most
concerned about is the mistle thrush, a common song bird whose numbers
have 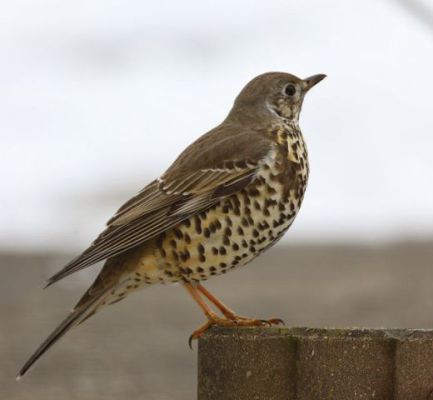 Mistle Thrush (Photo by Gerard Blokhuis/Creative Commons via Wikimedia)declined 28% between 1995 and 2010. The birds are now being seen in
only half the gardens that they were 10 years ago.

The mistle thrush, named for its fondness for eating mistletoe berries, is also known as the stormcock due to country legends that say that it is the last bird to sing before the beginning of a storm. They are most easily identifiable by their song.

Almost 600,000 volunteer birdwatchers participated in last year's event, counting more than 9 million birds. The survey has each volunteer counting the number and types of birds that visit their garden for one hour at some point over the last weekend in January. Children and teachers will do the same for their schoolyards over the next week.

The Great Birdwatch allows for the study of the numbers in decline (as well as the ascent for some species) as well as the distribution of different types of birds.

Mistle thrushes are of concern to conservationists, however, other species, such as blue tits, great tits and coal tits have been on the increase. Goldfinches, which were absent from the survey entirely in the early years, are now one of the top 15 species being counted in UK gardens.

A Parrot Pal For A Delightful Drink

This Bird Can Rock the Beat! The Dancing Animal Video of the Day!!!

Bugs, Birds and Other Bolted Beauties by Edouard Martinet
Comments