Can Luna The Polar Bear Learn The 'Harlem Shake'? [Videos]

The Buffalo Zoo is challenged to raise another $4 million to fund a new home for their baby cub nicknamed "Luna,' born in captivity this past November. Visitors to their website are encouraged to donate as little as $25, or as much as $5000. However while this type of funding approach will certainly appeal to the altruistic nature of locals, there are no incentives for people outside the area, like those included in a gofundme.com or indiegogo.com campaign, to motivate them.

While the northwestern region of New York State is where I grew up, I would be much more inclined to donate, if I was incentivized to do so. So this is what I propose to the Buffalo Zoo folks, based on the various levels of funding requests, they currently have in place:

After all polar bears are natural-born dancers. All they need is the right music to get their boogie on, as evidenced in this YourDailyMedia.com vid.

And since the "Harlem Shake" has taken on a whole life of its own, why shouldn't polars bears like Luna get in on the act. After all, no training would really be necessary. None of the cruel teaching tactics used by circus trainers would be employed to get Luna to shake out her moves. All the Zoo officials would have to do to get her into shape is to play the music once of twice daily, for several weeks prior to her world debut.

And based on this recent photo, looks like Luna is more than up for the task. 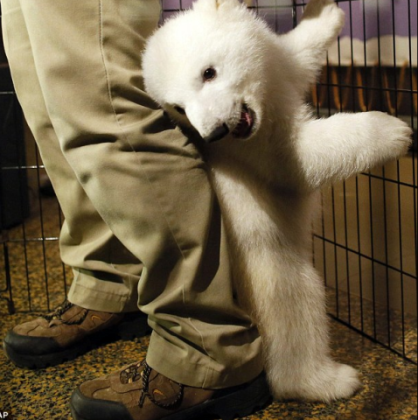 For those who live outside the Internet, "Harlem Shake" is a current meme that has been cybernavigating the Web for the last month or so. It harkens back to a dance originally called the "albee" introduced in 1981 by a Harlem resident named "Al B". What ignited it and made it go viral recently was a new tune introduced under the same name, recorded by American DJ and producer Baauer (whose real name is Harry Rodrigues.)

While the fad is a novelty on the same level as "Gangnam Style," it differs from the latter in that the dance moves for HS don't take much, and even. . . well, even. . . a Polar Bear could do it.

So there's your challenge Buffalo Zoo, introduce Luna to the "Harlem Shake" and see if she can't get her "Shake, Shake, Shake" going - and then see if you aren't able to close the gap on that final $4 million in funding. Hey, if Greenpeace sees its merits, why not the Buffalo Zoo! Good Luck!