At half the price of a personalized license plate, Californians can order a Pet Lover's license plate and help to fund the state's spay and neuter program.  Sponsored by the California Veterinary Medical Board and several national organizations, the plate is expected to provide a long term solution to pet overpopulation in the state.

The artwork for California's Pet Lover's license plate was designed by actor/artist Pierce Brosnan, and it's kind of cool - a sporty cat, wearing sun glasses, like a true Californian, sitting on the head of a dog. 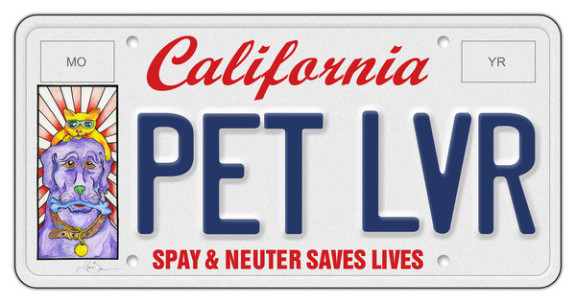 In Los Angeles to celebrate the continuation of the Pet Lover's plate, which was produced last year as well, Governor Jerry Brown joined Brosnan and other celebrities to hail the re-launch of the license plate program as "...a great idea. It's not government, it's not bureaucracy, it's not Sacramento," said the Governor, who just a few months ago was ready to sign a bill to euthanize unadopted dogs and cats after three days at a shelter instead of the current six days, if the California legislature passed the bill. (see Will Jerry Brown Be Known As 'The Dog Killer' Governor?)

Governor Brown's dog, Sutter, is the official dog promoter of the license plate, but it is hard to believe that the Governor is actively involved in the humanitarian treatment of pets judging from his stance on the euthanasia bill.  Additionally, another questionable sponsor of the California Pet Lover's License Plate is PETA, whose shelters kill more dogs and cats than any other shelter in the U.S. (see PETA Kills While Others Rehabilitate 'Unadoptable' Pets).

But the license plate program to raise money for spay and neutering procedures is not intended for shelter animals.  The money will be used to spay and neuter pets already owned by people who cannot afford to pay for these procedures themselves. Purchasing the license plate is a worthy cause, don't get me wrong, but it's not going to save many lives in the state's shelters, unless people want to adopt pets prior to their shelter 'deadlines.'

The Pet Lover plates can be ordered now for $50; renewal fees will be $40 per year subsequently.