The Buzz On A Beekeeping Dog

There are many kinds of working dogs in this world. We tend to think of
them as helping herd cows and sheep, sniffing out drugs along the
border, or even being parachuted into Osama Bin Laden's compound. One of
the lesser known dog jobs is that of beekeeper -- or more exactly, a
beekeeping assistant. A dog, like any other beekeeper, needs the proper
gear to prevent being stung. 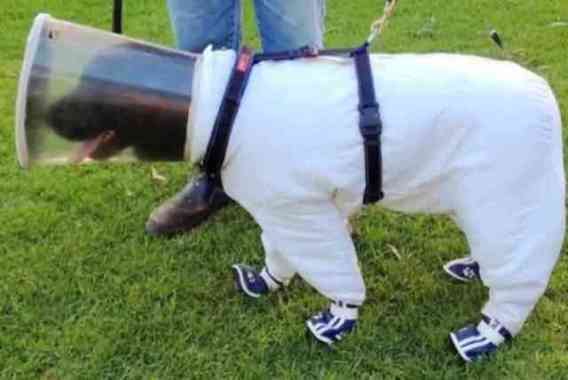 Bazz is a beekeeping dog in Australia that has been trained by his owner to sniff out a decidedly nasty bee disease called American foulbrood. It is a bacterium that infects the bee larvae that are less than three days old and feeds off of the baby insects. Once the disease has been discovered it can be treated with antibiotics. The disease is highly infectious and ultimately kills the larvae.

For a dog to get close enough to the hive to detect foulbrood it must risk angering the bees unless it is cold enough for them to be dormant. In the U.S. the cold temperatures during the winter months make it easy for these apiary dogs to do their job. In South Australia, however, the warmer temperatures keep the bees active year-round. This makes the job more dangerous for dogs down under.

Bazz's owner, Josh Kennett, realized that his canine coworker was badly in need of protective gear and set about designing just the thing. It took some trial and error, but Kennett finally has a working prototype. The challenge still remains in getting Bazz used to wearing the suit when he's on the job. He has to be completely enclosed in the suit, which is just not natural for a dog, and he still needs to be able to carry out his duties.

The protective helmet does rather resemble the "cone of shame." Perhaps that would be the hardest part for a dog to accept. That and not being able to wag one's tail must be a total indignity even if it is in service to the world.

Perhaps Bazz should have been names Buzz.