For decades, Lepidopterists have been tracking the range shifts of butterflies in response to climate change.  I recently came across an article from 1980 discussing the topic and I doubt that was the first of them (but I'm too lazy to try and research when the earliest of the studies was published). In the USA, Dr. Arthur Shapiro of UC Davis has been at the forefront of the painstaking collection of data over many years that is necessary to confirm actual range shifts, as opposed to anecdotal evidence that may or may not be indicative of genuine changes in a butterfly species' range. 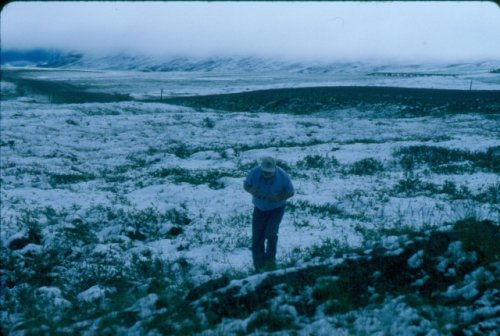 Looking for Butterflies in July along Alaska's Ice Road

Of course the climate has changed many times before and butterflies have responded to these changes for millions of years (there are fossil butterflies resembling species extant today that are 30 million years old, but butterflies have surely been around much longer than that.) Indeed, there has never been a time in the 3.5 billion year history of this planet that the climate has not been changing. The earth has been warmer than it is now and it has been cooler than it is now and, whether humans are around to see it or not, surely the ice will advance again to blanket northern Europe and northern North America.  Ten thousand years ago (the blink of an eye in geologic time), where I am sitting now was under a dome of ice a mile high.  The ground in Manhattan is still rising imperceptibly from the retreat of the ice, like a foam mattress slowly regaining its form after a 350 lb person rolls out of bed.

The study of the ranges of plants and animals is called biogeograpy  (zoogeograpy for animals alone) and has always been my favorite aspect of stuying the natural world.  In comparison, evolution is a bore because evolution, at bottom, is about the exchange and survival of genes among individuals, which is to say sex, and sex is pretty boring stuff compared to the vision of continents crunching into and sliding over one another, mountains rising  and towering above the plains before being eroded back to hills, vast sheets of ice advancing and retreating like ocean tides, and the seas rising and falling, swallowing the old coastlines but always making new coastlines, all on a time scale that trips our understanding no matter how hard we try to grasp its meaning .

Some butterflies adapted to cold climates and short growing seasons over the millions of years that ice sheets covered large stretches of the northern hemisphere. The butterflies that occur today in Alaska and Siberia are  the insect equivalents of Polar Bears - - they need cold climates to survive.  The image above was taken on July 4th beyond Atigun Pass on the Dalton Highway aka the Ice Road. Believe it or not, butterflies were flying a bit later in the day once the snow shower passed and the sun peeked through. (The bear of a guy trying to find butterflies is John Masters, an expert on the Alaskan butterfly fauna.) 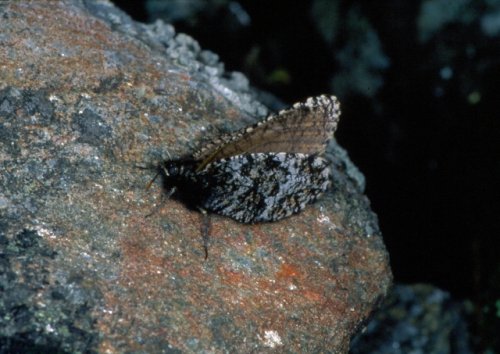 The photo of the Melissa Arctic (Oeneis melissa semidea) above was taken on Mount  Washington in New Hampshire.  Melissa Arctic has a holarctic range, meaning it is found in both Europe and North America, although the subspecies semidea is found only in the Presidential Range of  New Hampshire. The further north you go, the lower the elevations at which Melissa Arctic occurs. As far south as New Hampshire, it occurs only above treeline on the highest mountain peaks. This pattern occurs among many species of plants and animals, and in most cases indicates the species are Pleistocene relicts, meaning that 10,000 years ago, they were more widespread, but as the climate warmed, their ranges shifted north in latitude and up in altitude.  Species like Melissa Arctic on Mount Washington are trapped, and if the climate continues to warm past their point of tolerance, they will have "no place to go except heaven" as Dr. Shapiro put it.