There are different varieties of red land crabs on islands and along
coastal areas all over the world. They have a habit of migrating once a
year in astonishing numbers that can seem more like a crustacean
invasion. They swarm over everything, get in the way, and get run over
by cars in the quest to reach their biological imperative -- to mate and
reproduce. 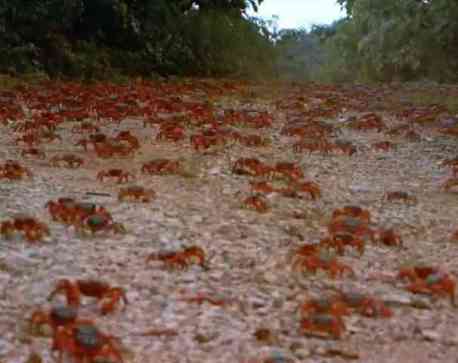 On Christmas Island in the Indian Ocean the migration starts each November. It is said that between 43 and 120 million of the little hard-bodies live on the island. They spend most of their time hanging out in their favorite shady spots all over the island. Then once a year, just before the start of the rainy season nature comes calling and they must make their way to the ocean to continue the species.

They let little get in their way and will climb over things, go around and through things, and end up in the most inconvenient spots for the humans living on the island (which is a part of Australia). To mitigate crab deaths along the highways, "crab crossings" are being set up. Authorities have identified areas with high crab traffic and tunnels are being constructed to allow them to migrate safely. 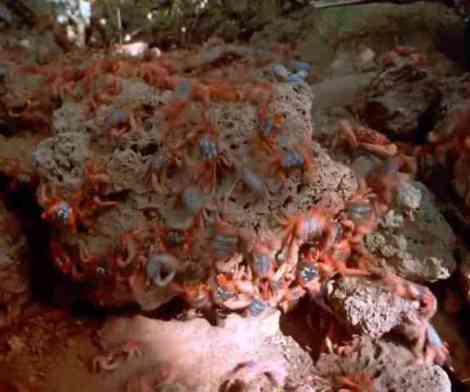 Red Land Crab Migration On Christmas Island (You Tube Image)In the Cayman Islands the event comes around in late May. On the island of Cayman Brac the crustaceans are smaller than those on Christmas Island, and the migration is the other direction -- it is the babies coming inland to make their homes in shady, sheltered spots. They also let little get in their way

In 2012 the migration was said to be the largest one ever seen. The hurricane season was not disastrous though. No one has yet studied this belief to see if it holds any validity. Perhaps the same ocean conditions that contribute to the production of hurricanes could also support a higher survival rate among the baby crabs.

One thing is for sure, that if you think they are predicting a tough season, you are more likely to be prepared for whatever weather nature hurls your way.