Just when you thought it couldn’t get any worse for our buzzing and pollinating pals, it looks like the world’s wild bumble bees are catching viruses from diseased honeybees… Uh-Oh… 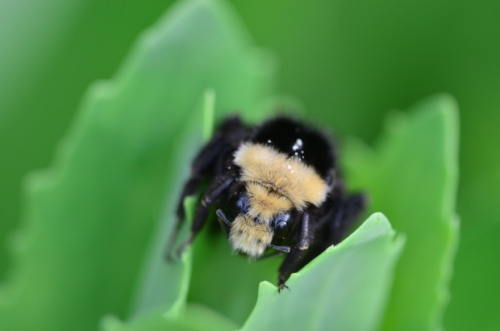 Bumble bees are the chubby loners that we see hovering around our gardens in the warmer months, and it’s normal for fully-formed adults to live around 21 days. Unfortunately, a recent research study has shown that bumble bees that have been infected with viruses transferred from domesticated honey bees shorten their already short lifespans to a mere 15 days. Wild bumble bees aren’t intentionally socializing with our sick honey bees, but they become contaminated with damaging diseases and parasites after landing on flowers that have already been visited by sick bees and during the occasional nectar theft of honey bee hives. That’s what they get for being chunky honey thieves!

Honey bees are responsible for pollinating about 20 billion dollars’ worth of fruit and flowers in the United States, but even without providing any sweet honey, bumble bees take care of another 3 billion dollars of produce annually. Although it’s brutally honest to say that bumble bees aren’t nearly as important to humanity as our pet honey bees, who knows how the population decline will effect crops in North America, South America, Asia and Europe. We don’t know if the crossover falloff of bumble bees ties in with the infamous “colony collapse disorder,” but I sincerely hope that we figure out how to combat that problem soon too!

Be Nice And Water Your Bees

Learning About Obamacare: Hundreds Of New Animal-Related Diagnostic Codes
Why We Should Be Concerned About The Sixth Mass Extinction?
Comments