Being a small island nation, England is especially susceptible to and
careful of invasive non-native species. One of the latest threats is
coming from North America in the form of black widow spiders. The toxic
arachnid 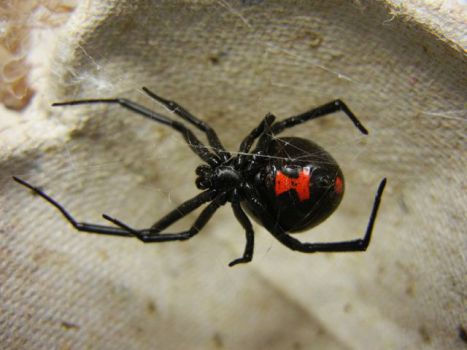 Black Widow Spider (Photo by Shenrich91/Creative Commons via Wikimedia) is perhaps most famous for killing and eating her mate once her eggs have
been fertilized -- once he has outlived his usefulness.

Because of the danger of the black widow becoming an invasive species the appearance causes much more of a panic there than they do to people in the U.S. where they are fairly commonplace.  The spiders have been showing up in Norfolk, England.

A shipment of tires from Arizona brought in a large nest of the arachnids that was believed to have hatched inside the shipping container and then survived the 5,000 mile trip. A pest control firm was called to come and deal with the hundreds of spiders.

Just a month previously the same post control firm had been called out to the report of a black widow on the premises of another company in Norfolk. There a single female and egg sack were collected. After 48 hours the eggs hatched an additional 100 babies.This spider is thought to have originated in a shipment from Texas.

The spider is most easily identified by its sleek back body and bright red hour glass on its abdomen. For those concerned about the fate of the spiders, suitable homes are being sought for them.