Boulder, Colorado, Says Thanks But No Thanks For Bison Herd

Two hundred years ago much of Colorado was inhabited by large herds of
American bison, more commonly referred to as buffalo, including the
Boulder Valley. By the 20th century the only buffaloes left in Boulder
were 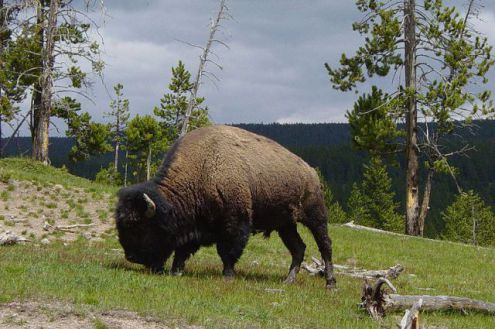 Boulder, Colorado, turning down gift of bison. the sports teams of the University of Colorado. In October, 2011, Ted
Turner, founder of CNN, offered the city of Boulder, Colorado a small herd of 20 bison
as a gift, and an attempt to reintroduce bison to the Boulder area.

At one time 20-30 million bison roamed over most of North America from Mexico to Alaska. In the years between 1830 and 1880 they were all but wiped out by hunters and by the U.S. military. The military used wiping out the bison as a weapon against Native Americans.

Currently there are approximately 500,000 bison in North America. Most are found in commercial herds. Turner Enterprises holds several herds for both conservation and commercial purposes. In Colorado bison are considered domesticated animals and therefore do not qualify to be housed in nearby wildlife refuges.

In December, city officials instructed the Open Space and Mountain Parks Department to engage in a feasibility study to determine if the gift should be accepted. Two areas of city open space near the scenic overlook just off of U.S. 36 on Davidson Mesa were identified. In addition to a spectacular view of the city and the Flatirons, people coming into the city would be favored with a view of the bison herd. The plan had many supporters and detractors.

Last week the Open Space Board of Trustees recommended that the City Council reject the plan. They said that the plan would be too expensive in terms of the installation of infrastructure and annual maintenance of the herd.  The Board also advised that trying to find another venue for the bison would be an unwise use of staff time.

Other drawbacks to the plan included environmental concerns over year-round grazing on the xeric grasses of the area, and loss of the open space area for other uses.