It's not a great idea to pick up hitchhikers. It's an even worse idea
to pick up road kill, especially something you yourself just hit on the
highway. One woman in Bangor, Maine learned this lesson the hard way on
Wednesday 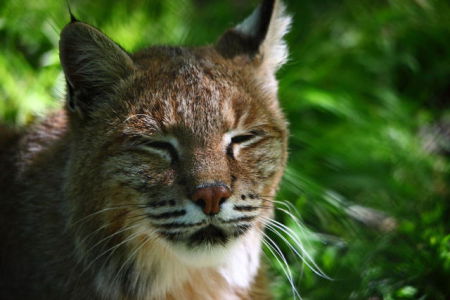 Bobcat (Photo by ForestWander/Creative Commons via Wikimedia) night after she hit a cat with her car. She put the animal in
her car thinking she would get help if there was chance that it was
still alive.

The woman, whose name was not released, found out that the cat was only stunned when it woke up. Not only did she discover that the cat was alive, but that it wasn't just any cat. She had mistakenly put a wild bobcat into her car and then gotten in with it.

She then pulled over and got out of the car with the cat following. It is difficult to say who was more terrified in the situation. The cat hid under the car where officials were able to catch it using a capture pole. Maine Game Wardens took the bobcat into custody. The animal was euthanized a short time later due to its injuries.

There is no word on whether or not the driver required medical attention or just a good, stiff drink.

Tara The Attack Cat: Animal Heroes
When Around Lions, Keep Your Door Locked! The Animal Video Of The Day!!!
Comments