These tiny, 2-inch long fish look like they are dressed to go to the
next Broncos game with their bright orange and blue coloring. However,
the most amazing thing about them is that they are capable of changing
sex -- 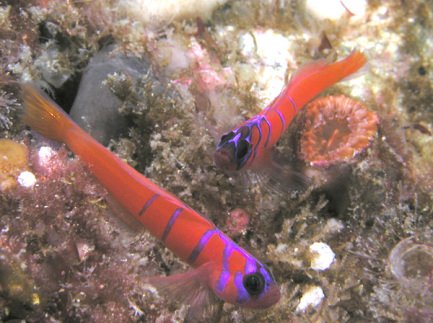 Bluebanded Gobies (Photo by Aquaimages/Creative Commons via Wikimedia)apparently at will. Matthew Grober of Georgia State University
has received a grant from the National Science Foundation to how and
why.

Already he can detect the change within a very short time as the behavior of the fish begins to change. It takes a week or two for the change to take full effect. Females that become males start making zigzag movements associated with male courtship and become less submissive.

In their natural environment each male will have a "harem" of four to five females. If the male dies the dominant female takes command and then makes the transformation.

In laboratory experiments Grober and his team created primarily
male environments to test whether or not males would become female. They
did make the change. The reason for the fish being able to change
appears to be based in evolutionary biology. The ability to maintain the
proper gender balance helps to guarantee the survival of the species.

Sex change in nature is very rare, though not unknown. Other creatures that are capable of making the change include the clownfish and the limpet snail.