There are times when taking in a stray cat can be more of a blessing than you ever thought it could be. For Judy Godfrey-Brown of North Wales it was a downright miracle. Her dog Terfel
had been losing his sight to 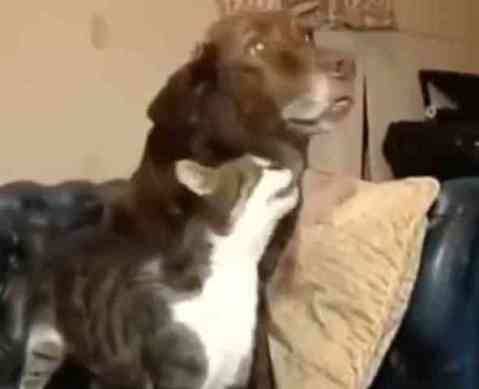 Terfel and Pwditat (You Tube Image)cataracts and was increasingly limiting
himself to his basket so that he wouldn't keep crashing into the
furniture. Then came Pwditat and everything began to change.

No, that is not a typo there. The cat is named Pwditat. That is the Welsh spelling of puddy-tat, as in I tawt I taw a. . . She is a pretty gray tabby with white and when she saw Terfel for the first time she seemed to just automatically know that he needed her. It is likely at that point Terfel would have been able to see little more than light and dark.

The next thing Godfrey-Brown knew Pwditat used her paws to coax Terfel out of his basket and into the garden for a bit of an explore. 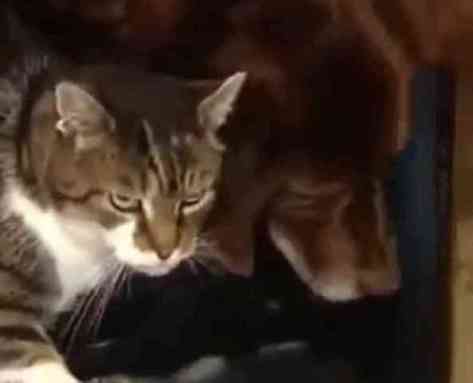 Terfel and Pwditat (You Tube Image)Just like that the 8-year-old Lab mix's world opened back up and life became worth living again. According to Anne Cragg, a friend who cared for the pair while Godfrey-Brown was in the hospital, Terfel and Pwditat are truly best friends. They are together virtually all the time, including when they sleep. Pwditat acts as Terfel's seeing-eye cat and helps the dog find his way around the house and garden using her paws to guide him gently.

The miracle arrival of Pwditat has given Terfel a whole new leash on life.