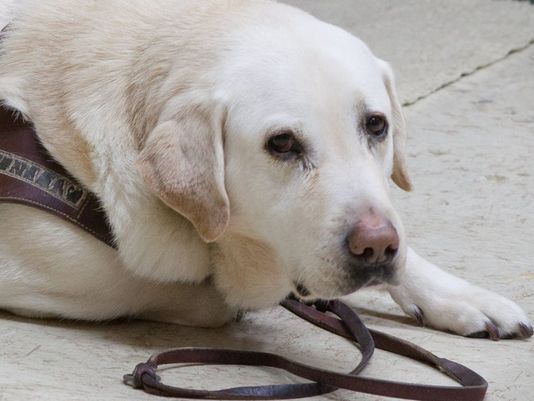 Beethoven, the Missing Guide Dog: The Labrador retriever was recently reunited with his owner

Just when you were starting to think that perhaps social media was getting more people in trouble than anything else comes a heartwarming story of a missing guide dog being reunited with a blind man through the help of Facebook users. Yes, Facebook is great for getting the word out, and it was recently used by KGW-TV and other folks on the popular social media site to help 28-year-old Blake Hardin of Vancouver, WA, find Beethoven, his faithful guide dog and constant companion.

Schools for the Blind

It seems Beethoven wandered off over the weekend and ultimately went missing. Upon discovering the dog's absence, Hardin took it upon himself to scour his neighborhood in search of the 10-year-old yellow Lab on his own. Unfortunately, he could only get so far in doing the job himself. Blind since birth, Hardin and Beethoven had recently moved to the area so Hardin could attend the School for Piano Technology for the Blind, a facility where enrollees learn to tune pianos for a living. After the search proved fruitless, friends put up posters around the neighborhood pleading for assistance in Beethoven's safe return. With no immediate response, the Alabama native was forced to go to school the next day without his trusty guide dog. While he says he managed to muddle through it, it wasn't the same without Beethoven.

It was about this time that a tracking company caught wind of the search and offered their services for free. By 2 p.m. Monday afternoon two trained sniffers by the names of Willow and Tyler were on the job and hot on the scent of the happy wanderer until the trail went cold. That's when KGW-TV and other Facebook users began sharing the information in an effort to reunite the pair. Facebook has been successfully used countless times for assisting in lost or missing persons and pets. Most of those instances have had happy conclusions. Once the post regarding Beethoven went up, it was shared by thousands of users within minutes. The community gladly pulled itself together in order to find the missing service dog. Thankfully, their efforts paid off almost immediately. 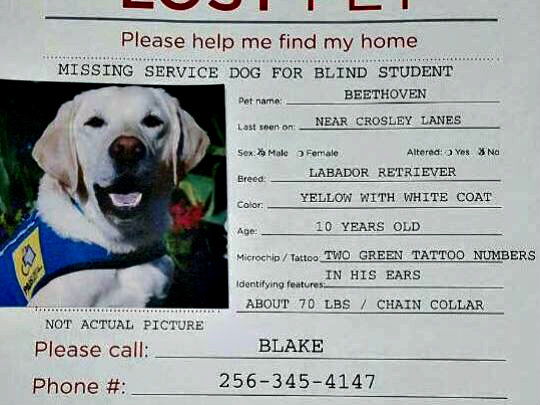 As it turns out, a family living approximately a 1/2 mile away from Hardin's residence found Beethoven around 2 a.m. the night/morning before after he turned up on their front porch. Regrettably, he was not wearing updated ID tags at the time of his disappearance, so they took him in and let him spend the night until they could investigate further. Blake Hardin had recently ordered the guide dog new tags to reflect his new address and to help identify him in a situation such as this, but they hadn't arrived yet. Roughly 13 hours after Beethoven came into their lives the family saw the social media story regarding their new house guest and began making the necessary calls to return him to his rightful owner. While Beethoven looks a bit sheepish in his photo, he and his master couldn't have been happier to be rejoined.

Beyond the happiness and joy the two must have experienced during their recent reunion — which you cannot in any way put a price tag on — the process and cost in association with training guide dogs and service animals is both lengthy and extremely costly. It can be years before someone in need is paired with a suitable animal and many years more before a new animal is placed with them again if the first animal is lost or passes away. That's why it is especially heartening that Beethoven was found safe and sound and in shape to not only go home, but to resume his duties at once. It's interesting to note that while guide dogs are considered service dogs, not all service dogs are guide dogs. That's because guide dogs are specifically trained to assist the blind or visually impaired.

Guide/service dogs and their owners share a special bond. While dogs in general are sensitive to their master's feelings, moods, health and disposition, service animals can be particularly so when it comes to being in tune with their charges — especially children and the ill. Not surprisingly, Labrador retrievers are often the first choice among the many organizations that train guide dogs and service animals due to their even temperament and loving nature. In Beethoven's case, we can only assume he'll be kept on a shorter leash until his new tags arrive. In the meantime, hooray for Facebook users and everyone else involved in facilitating this wonderful reunion.