Both bird and humans residing in the Northeast corridor of the U.S. witnessed their habitats and communities at odds with nature most recently. The devastating effects of Superstorm Sandy played havoc to the coast as well as mainland New Jersey and New York. Similar to migrating birds, "snow birds, or New Jersey residents who winter in Florida were fortunate to escape Hurricane Sandy, while the rest of us got a bird's eye view of Mother Nature's wrath.

Bryan D. WattsWhen Director of Conservation Biology at The College of William & Mary, Bryan D. Watts was asked after the storm, "how do birds react to hurricanes," he responded that "when birds encounter a storm like this, they're basically in scramble mode just like we are. . .and birds that require low habitats - marshes, beaches, dunes - all of those species would have been displaced."

"On the other other end, we have species that are inconvenienced for a short time like we are, and ride it out like we would," added Watts. In my own community with a resident population of 4,000, the bird feeder I've placed on my terrace attracts sparrows, finches and doves. In a video I produced to document the affects of Hurricane Sandy, you can see that birds that fed off of that feeder the day before the storm, returned within 24 hours after the storm to feed once again. Where they sought higher ground in the meantime, is a mystery to me?

Also in the above video, I was able to capture seagulls taking refuge in puddles inland shortly after the storm - but then returning to Newark Bay and the Hudson River, post-Sandy.

According to news correspondent Natalie Angier in her NY Times report -- included in a bird’s weather management skill-set is the power to detect the air pressure changes that signal a coming storm, and with enough advance notice to prepare for adversity. Scientists are not certain how this avian barometer works, yet the evidence of its existence appears to be clear.

“Birds have tremendous situational awareness,” said Watts. “They know where they are and where they’re going, they’re able to fly back repeatedly, and they’ve shown an amazing ability to compensate for being pushed off track.”

Cavity nesters such as woodpeckers tend to bide their time in hollowed-out trees. Smaller songbirds that haven’t already evacuated may also perch on branches —the sturdier and more sheltered the better— using their automatically clenching toe muscles to hold them in place. Fortunately, perching as such does not demand an additional output of avian energy: Birds always clench their toes when they land so that they don’t topple out of trees during their sleep -- and heavy winds require the same technique.

So getting out of Dodge or flying the coop - while temporary - doesn't seem to alter the behavior of those birds who like residing in the Northeast. Instead of moving ahead of, through, or with a hurricane, many species get as comfortable as they can, so they can just weather the storm. Perhaps, us humans would incur less anxiety if we learned to do the same! 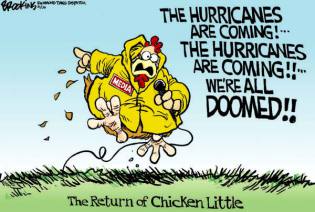 Bird Baths: How To Bathe Your Bird And Why It's A Good Idea