Birds And Planes: Dogs Keep Them From Colliding 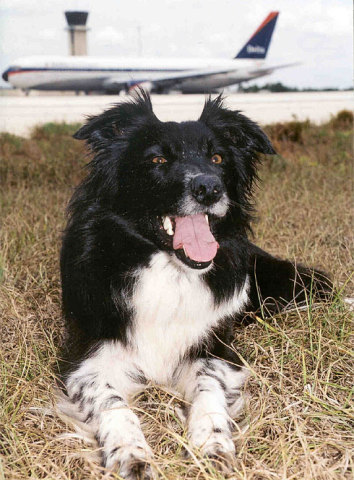 Southwest Florida International Airport has been using dogs to chase birds away from the airport since 1999. It is now on its third generation of border collies, that are part of a bird-dog training program.

About 20 airports around the U.S. now use border collies to chase birds. Cincinnati's Lunken Airport is another location where large birds, particularly geese, had many collisions with airplanes before the border collies came to the airfield.

The problem of damage to aircraft caused by encounters with wildlife costs more than $600 million a year in damage to both civil and military aircraft and has cost several hundred lives. According to the U.S. Bird Strike Committee, 90 percent of the birds are protected species, but methods of chasing the birds, like explosives, often kill the birds.

The border collie is seen by many environmentalists as a positive, humane solution for preventing wildlife from getting in the way of aircraft. The border collie that's trained to chase birds will keep harassing the birds, on command from his trainer, until they leave. His persistence is "dogged" and he will harass and harass until the birds fly away. He doesn't kill them, he just chases them, herding them in the direction they should fly. If you know a border collie, you can envision this easily.

Though birds get used to the sounds of explosions or seeing laser lights, they don't become acclimated to a border collie. He is always viewed as a predator, like a coyote.

Perhaps today's "miracle on the Hudson," will encourage more airport
managers to look into using trained bird dogs to protect their
passengers, crews, planes and the surrounding wildlife. Additionally,
they would be helping to give homeless working dogs jobs they really
love to do.

Mac Is This Year's Newest Clydesdale!