Bipolar syndrome or manic-depressive illness has affected man down through the ages, while other animal 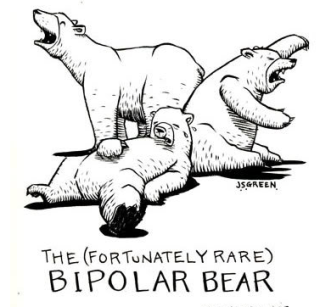 species [whether domesticated or found in the wild] appear not to be affected by this mental disorder. That was until recent research discovered the 'bipolar bear.' Also known as the 'north-south' bears, this unique species is known to migrate between the north and south poles so they can thrive in winter conditions year-round.

Differing from humans that vacillate between the extreme mood swings of deep depression and heightened mania due to a chemical imbalance, bipolar bears appear to exhibit highs and lows dependent on which pole they are visiting. Research points to high states of mania in the north, and low states of depression in the south.

These geographically-determined mood swings occur have baffled conservationists and animal psychiatrists for years. Particularly since one would question why these bears keep going south every year if the only reward they get for their effort is a major case of the blues?

A distinction has been made between bipolar bears and bi-polar bears. The latter are your more experimental polar bears who are attracted to both sexes; whereas the former are manic-depressive, but can be of any sexual orientation. The confusion is exacerbated by the fact that, when in the manic state, bipolar bears are willing to have sex with just about anyone or anything.

Bears living in the north tend to act in a manner suggesting elation, euphoria, irritation, and/or suspicion. They 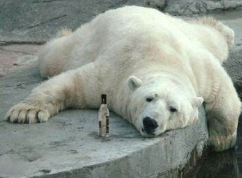 have substantial energy and can roar non-stop for hours. They develop grandiose ideas, some of which have led to recent conflicts with various human governments; for example, in 2003 several bipolar bears occupied Hans Island, tore down both the Danish and Canadian flags, drank the Danish and Canadian liquor left at the base of the flags, and refused to leave.

This created an international crisis, but tensions eased when the bears went south for the summer to shoot heroin and watch blue collar T.V.

As you've probably figured out by now, the basis for this hypothesis is totally absurd and provided soley for our readers manic pleasure. Bipolar bears

as described in this post comes directly from the deranged minds behind the gang of misfits and jokesters over at Uncylopedia.

News Bisquit put a satirical spin on the story by describing this bear, called "Herman" as bipolar.

According to clinical zoologist Dr. Ute Lemper, he believes this bear's condition was the result of a cross breeding of a grizzly bear with an arctic bear. Visitors are always excited to see Herman in a manic phase performing tricks, while dancing and riding around on a unicycle. One visitor said, "This is so much better than last week when he just sat there rocking backwards and forwards listening to Leonard Cohen." 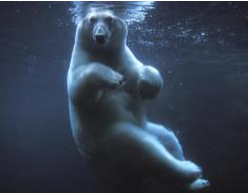 Herman, the Bipolar German Bear?
Critics have asked what the zoo is doing to help Herman. “We’ve tried psychotherapy”, said Dr Lemper, “but so far he’s mauled three analysts and eaten the couch.”

So is it the North Pole, the South Pole or the zoos in Germany that are the root of the bipolar condition in polar bears? You decide, and let us know if you've ever encountered one [up close and personal] in your travels? 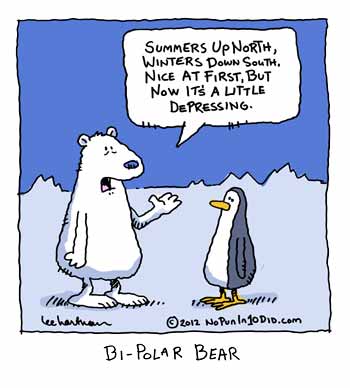 Bears
Fun Stories
Funny
News Stories
Polar Bears
Happy Panda... And Something Else -- The Bonus Animal Video Of The Day!!!
Children With Their Heads In The Clouds Over A Winnie-The-Pooh Look-Alike
It’s A Bear-Eat-Bear World In Canada!
Busybody Bruin Shares Selfie With Québec Smokey Bears
Comments