Narrator: Vincent, Iowa shelter cat, a cat barely able to survive.
Oscar Goldman: We can rebuild him. We have the technology. We can make him better than he was. Better, stronger, faster. 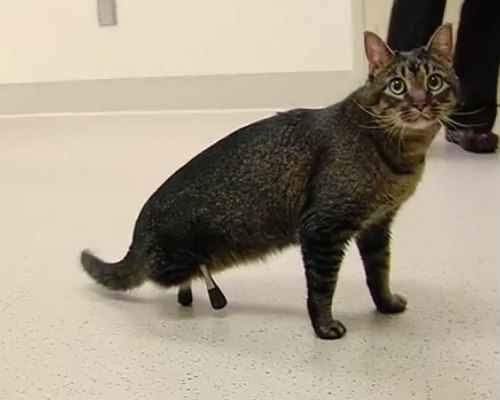 Okay, so maybe Vincent the shelter cat isn’t quite bionic, but he’s pretty darn close. That’s because he’s been fitted with hind legs made from titanium due to a birth defect that left him unable to walk. Vincent was apparently born in rural Nevada, Iowa, with an abnormality that left his hind limbs missing from the mid-tibia down. Found abandoned as a kitten, he was somehow delivered to the Story County Animal Shelter in Iowa. Without the ability to walk, Vincent was a poor candidate for adoption.

As luck would have it, a kind woman with a big heart happened to be working at the facility. Smitten with the kitten, she contacted her daughter, who was studying veterinary medicine at Iowa State. The daughter quickly put her mother in touch with Dr. Mary Sarah Bergh, a veterinary orthopedic surgeon and professor at the university, who agreed to examine Vincent. It wasn’t long before Bergh decided to try fitting the domestic short hair with titanium alloy prosthetics to improve his life. 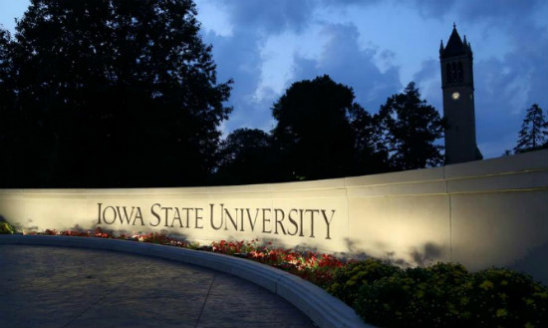 After the implant procedure was accomplished, Vincent was back up and around in no time. Bergh, who is also in charge of his post-operative care, has high hopes for Vincent and his ability to live a full life. As he continues to improve and adjust to the new limbs, he may soon be leaping on couches, beds, counter-tops and other high places he'd like to investigate. "I anticipate that he’ll be jumping and doing really normal cat things very soon," Bergh said in a press release. She estimates that there are only about two-dozen animals in the world with Vincent's particular hardware.

In addition to his front paws, Vincent's body weight is now fully supported by the titanium alloy shafts Bergh implanted. Angling upwards, inside his bones, the shafts are exposed to the environment, requiring Vincent to receive antibiotic spray treatments twice a day. Other than that, he’s better, stronger, faster than ever. It’s said subsequent procedures will gradually lengthen his legs, so that eventually they will be the same length of a normal cat's hind legs. Then maybe he really will be the equivalent of the bionic cat. 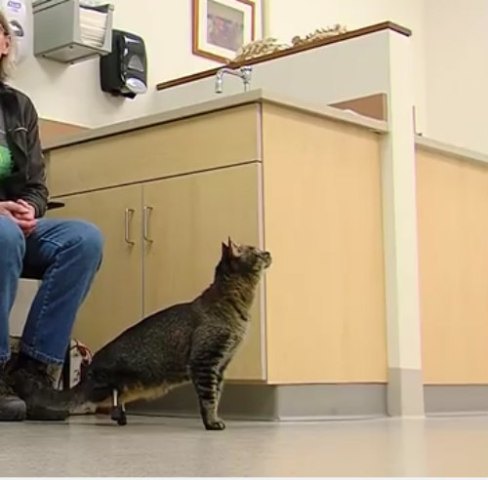 Now is the time of year when animal rescues are increasing and helpless pets are showing up at shelters at an unfortunate rate. Due to this, many shelters and rescue centers are now offering holiday discounts on animal adoptions in an effort to make room for incoming pets that will soon need forever homes. If you’ve been thinking about adopting anyways, not is a really great time. You can save yourself some money, help out over-burdened animal shelters and spare a dog or cat from possible death. Go on line in your area for adoption deals at local shelters to find out more.