For those still scratching their heads as to how Big Bird became fodder for this year's presidential campaign, it appears that nation's favorite pet, now in his early 40s is a major bone of contention for one side of the aisle. Shifting from cracking down on Wall Street, Republican Mitt Romney took it upon himself to bash Sesame Street, and one of the country's sacred cows. . . erh birds!

In the recent Romney-Obama debate on October 3rd, the GOP candidate directed his comments on the subject to Jim Lehrer, one of PBS's leading newscasters, and the network where Sesame Street began its TV-run some 43 years ago. Now having stood the test of time becoming almost as Americana as apple pie, Romney used th

Jim Lehrere 8-foot muppet as a political target that circuitously winged its way back to the nation's economic crisis.

"I'm going to stop the subsidy to PBS," the former Massachusetts governor, a Republican, said during a deficit-cutting discussion. "I'm going to stop other things. I like PBS. I love Big Bird. I actually like you, too, Jim (Lehrer). But I'm not going to ... keep on spending money on things to borrow money from China to pay for it."

In an effort to reduce America's debt by ending the federal subsidy of the Public Broadcasting System, it's Romney's plan that putting down Big Bird could be the solution?

In actuality like so many of the other misleading debate stats thrown at the American people from both the GOP and Democrats, the numbers are just too fuzzy to add up.

According to a New York Times report, even factoring in monies provided by states and local governments, Americans pay less than $4 a year for the both PBS and NPR.  In comparison, Canadian and Australian pay about 8 times more per capita, the French and Japanese 14 times more, Britons 24 times more and the Germans are in excess of 40 time more.

In a statement decrying Mr. Romney’s comments, PBS noted, “The federal investment in public broadcasting,” about $500 million a year, “equals about one one-hundredth of one percent of the federal budget.”

Also key to their funding, public television are experts in working efficiently to make limited resources produce miraculous results. In fact, in the same PBS statement, the network noted, "for every $1.00 of federal funding invested, they raise an additional $6.00 on their own – a highly effective public-private partnership."

The backlash from taking this tactic has turned some of Romney's positive gain from the debate into its own negative. Within minutes after the Obama-Romney match-up, a new Twitter handle @BigBirdRomney was created with over 10,000 followers (as of this posting) with tweets that echo the Vietnam protest chants of the 60's where: "Hell no, we won't go" was appropriately changed to:  "EL MO. WE WON'T GO."

An appearance on Saturday Night Live even got Big Bird to stay up past his bedtime. Trading barbs with

anchor-funny-man Seth Meyers on the show's "Weekend Update," you heard Big Bird claim how odd it was to be the focus of attention in a presidential debate. "It's so weird to think about that just a few days ago, I could just blend in like every other perfectly normal 8-foot talking bird."

So readers do you think this was a peripheral distraction? Is there any credibility to the idea that its time to think

about euthanizing America's favorite pet? If it wouldn’t make much of a difference to  the debt or  the deficit, perhaps Romney might want to think about conferring with Count von Count before his next debate. Perhaps that muppet could address the candidate's fuzzy math contentions in a light that would make him understand that the numbers just don't add up. 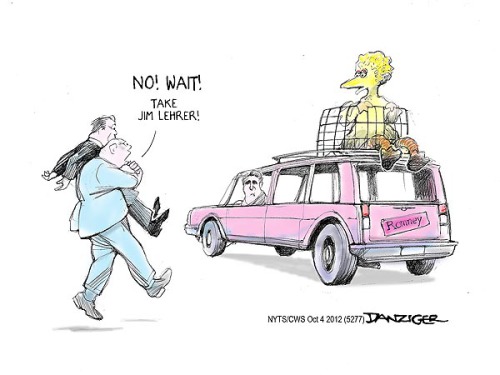 VIDEO UPDATE: October 9, 2012: President Obama's campaign has a new commercial out in its latest attempt to capitalize on Gov. Romney's threat to fire PBS's beloved icon Big Bird. Tagging his opponent as an out-of-touch extremist, the video is a reminder of which U.S. street Romney favors:

Groundhog Day Has A Long History, As Does Punxsutawney Phil