Bengus The Air Force Dog Retires With Dignity and Panache

Curmudgeon is a word that usually conjures images of eccentric, nasty and possibly even dirty old men. But Bengus, a nine-year-old German Shepherd  drug-detection service dog, fits the definition to a 'T' (and every other letter of the alphabet as well). All service dogs retire in style from McConnell Air Force Base and he is no exception. (See my article on the Dog who Took A Bite Our of Isis.) But, as usual with all things Bengus, his playful spirit takes  things up a notch.

Remember the days when comedian, Dean Martin, used to tell his viewers that he was 'goin' over to the couch'  between the different acts on his show? Well, even if you don't, for retirement ceremonies performed at this air force base, a special couch is featured for service dogs.(See my article on Malec.) They are led to this symbol of respite and relaxation and requested to sit. Usually, in these solemn moments, the handler sits beside the dog to share in the accolades for the many jobs well done.

That was not the case at this retirement ceremony. In front of an audience of airmen, officers and civilians, Bengus revealed his true feelings. He moved dutifully on command onto the couch and then proceeded to stretch out along the entire length of it, leaving not even an inch of space for his handler to sit down beside him. In dog talk, this gesture boldly translates into my couch and my honor.

McConnell Air Force Base in Wichita, Kansas, has been Bengus's home since November of 2008. He began his service as a drug detection and patrol service dog at Lackland Air Force Base in Texas in April of that same year. (See my article on Lucca: A Mlitary Service Dog for All Seasons.) He also did one tour in Afghanistan from November of 2012 to June, 2013.

The audience applauded Bengus for his service and the ceremony featured an honor guard, the National Anthem, the presentation of the American flag and perhaps the most significant gift of all, a humongous bone awarded personally to this deserving canine.

There were those who spoke in his honor. Captain Chase Shields, Operations Officer of the 22nd Security Forces Squadron, related to onlookers in the crowded auditorium how one handler who worked with the dog commented that "he spent far too much time on the narcotics scent." His favorite story, however, was the time when Bengus was not given the obligatory break before being transported to a vehicle for duty. He related in true doggy fashion how he felt about this by relieving himself on his handler's boot! 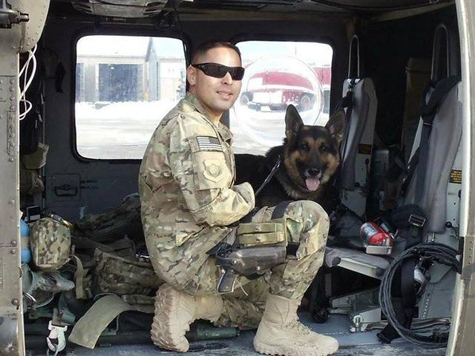 All lightheartedness aside, Bengus couldn't be more deserving of praise and admiration. He proved how good he was at his job over and over. When in Afghanistan in support of Operation Enduring Freedom, he made three drug finds, one of which totaled 293 grams of black tar heroin, hash, meth and opium-laced chewing dip. He also executed more than 800 random anti-terrorist measures, safeguarding 15,000 military and civilian personnel and $6 billion in vital Air Force assets. (See Sergeant Rocky and Officer Andrew Brown.) His drug-detecting abilities were so sharp that he once sniffed out narcotics some 200 feet away and at least 7 feet above his handler's head on a massive flatbed truck.

Bengus will now be the special pet of Staff Sergeant Dustin Combs, who has a warm spot in his heart for this four-legged, noble and cantankerous canine.

Hey, Bengus, 'at ease' for the rest of your life!

Wildfires Getting Your Goat? Goats May Be The Answer
Pit Bull Rescues Unconscious Owner From Oncoming Train
Comments