Be The First on Your Block To Freeze Dry Dog Poop!: Great Idea?

Patent#US 6883462 represents a valiant attempt to deal with a smelly subject. The Doggie Poop Freeze Wand is a device and vehicle for the decomposition and discard of animal waste all in one flip of wrist (or sleight of hand, if you prefer magic terminology). It s comprised of an elongated, hollow, tubular, aluminum housing and a detachable cylinder filled with compressed liquid enzymes which is inserted into the hollow part, an operational button for the placement of plastic trash bags and a threaded top at the end of the housing which encloses the empty space. 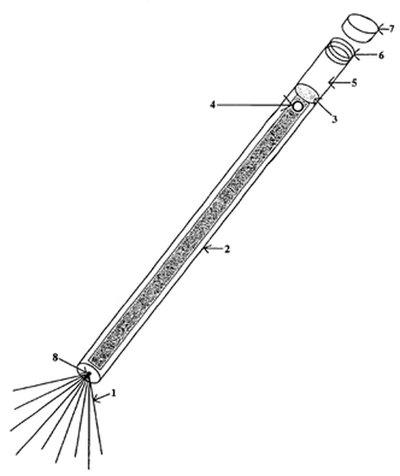 The user simply aims the Doggie Poop Freeze Wand at the animal waste (No bibbity bobbity boo here, although there is something that rhymes with that last word). When the operation button is pressed, the pressurized, freezing chemical or enzymes are released out of the opposite end so that it will freeze or breakdown the animal waste.

Animal waste disposal has been a topic covered by many inventors down through the decades. Consider “Dog Poop is a Growing Business” and “Hockey Stick to Combat Yard Waste: Great Idea?”

The Doggie Poop Freeze Wand is really very clever, but I don’t know about buying one. First of all, I have cats and they would never talk to me again, and secondly, I may never feel the same way abut a popsicle again because of the possibilities conjured by just adding one more “o” to the middle of the word.