Barney The Dog Has A Flintstones' Moment, Eats Pebbles

Barney the chocolate Labrador retriever loves to go for long walks on
the beach in Chessington, Surrey, England with his mom and dad, Kim and
Andrew Woolland. One day last year the trio went for a walk along 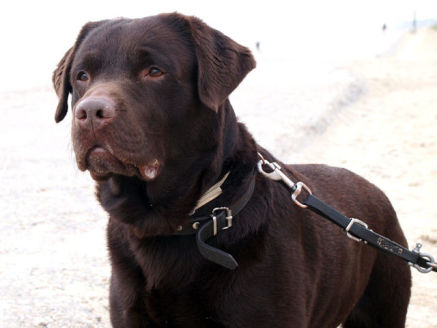 Chocolate Labrador Retriever Portrait (Photo by J187B/Creative Commons via Wikimedia)the
shore in Kent and since they were alone, the Woollands took Barney off
his lead to let him run. Barney made a day of it running along the nice, pebbly beach
and dashing in and out of the surf. The next day Kim noticed that
Barney was no longer his happy, carefree self.

Kim had noticed a few stones in Barney's basket after they returned from their walk, but didn't think anything of them. He was always stashing things there. The next day she found a few more stones in his basket. It looked like he had passed the stones. Andrew ran his hand along Barney's belly and they could actually hear more stones rattling inside. 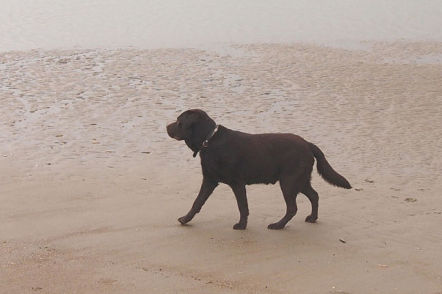 Chocolate Labrador Retriever on the Beach (Photo by J187B/Creative Commons via Wikimedia)So the Woollands took him off to the vet. There x-rays were taken and everyone found the result jaw-dropping -- in addition to the stones that Barney had managed to pass, his stomach and intestines were jammed full of stones. The Woollands were astonished. While on the beach chatting and watching Barney they had seen nothing unusual. The dog had managed to surreptitiously scarf more than 100 beach pebbles during the outing -- the 30 that the Woollands had found in his basket and another 79 that had to be surgically removed.

Fortunately the Woollands had taken him to the vet quickly, avoiding any further problems. Barney needed more surgery later because he had damaged a tooth while eating the stones. He has recovered nicely from both surgeries.

Barney and his family still go walking, but those nice, pebbly beaches are now off-limits. Hopefully if Barney wants to eat more pebbles he will go for the cereal kind rather than the geologic ones.