In New York in February, it will become illegal to pose for a photo with a lion, tiger or other big cat. The measure - 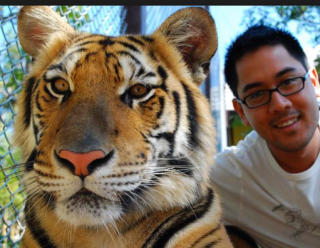 which specifically prohibits contact between members of the public and big cats at animal shows, zoos,circuses and carnivals - was passed after self-portraits with the animals started becoming more popular online, particularly with some young men on dating sites such as Tinder.

Billed as a matchmaking mobile app that uses GPS technology to match up individuals looking for like-minded folks within a specific radius, it was launched in August 2012 by Sean Rad, Whitney Wolfe, Jonathan Badeen, Christopher Gulczynsk, Joe Munoz and Justin Mateen.

The app was initially piloted on college campuses, the first being the University of Southern California, and was the winner of TechCrunch’s Crunchie Award for “Best New Startup of 2013.

Feline Canoodling Against the Law 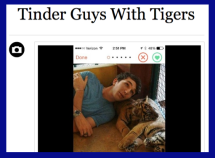 The new law comes after the online-dating app saw a major uptick of photos - mainly of men - posting profile pictures of themselves next to tigers and other big cats. The phenomenon has come to be known as the "tiger selfie" - with sites like tinderguyswithtigers tallying views in the tens of thousands.

A report earlier this year from the Wall Street Journal estimates that one in 10 photos on Tinder has a tiger in it - perhaps because the men want to appear macho and adventuresome to potential partners. 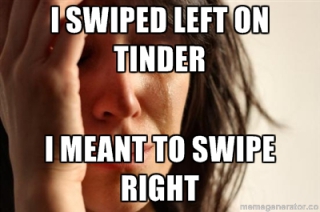 someone within their geographic radius. Swiping right indicates they would like a potential match up, whereas swiping left says: “nope, I have no interest.” Since men swipe right three times as much as women, one could understand why men are seeking out tigers to improve their odds on hooking up.

With the penalty costing $500 for the first offense and $1,000 for the second time, the anti-tiger backlash has been mounting on several dating sites—where many users are indicating they don't need a tiger photo to make an impression, while others are

seeking out other big-game animals, including snakes, lions and elephants to distinguish them from their competition.

In defense of using tigers in selfies, “Guys think, 'If I 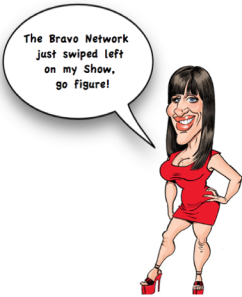 can tame a tiger, then I'm worth dating,' " said Patti Stanger, a professional matchmaker and star of Bravo's "The Millionaire Matchmaker." But relying on her advice isn’t necessarily a lock on meeting your ideal match, since her low batting average got her TV show cancelled this past year.

Goat Versus Reporter -- The Animal Video of the Day!!!

Simon's Cat in "Screen Grab" -- The Animal Video of the Day!!!
"Lion King" Played Out At The Denver Zoo
Comments