Bald Eagles Deprived Of The Wind Beneath Their Wings

Injuries to bald eagles appear to be on the rise, but it's not clear as to why. If one was to Google News the keywords "bald eagles injured," one would find over 100 separate cases of injuries to bald eagles just within a few short months. Various sightings have located those with injured wings due to territorial fights with fellow flock members, gunshot wounds from hunters and fractures due to various environmental hazards.

Some are given second chances when captured by treatment centers or zoos, while others less fortunate need to be euthanized to put them out of their pain. In the small community of Errington on Vancouver Island, British Columbia, Canada, such might be the case for a bald eagle believed to be the target of a shotgun blast.

Now under close watch at North Island Wildlife Recovery Centre, this appears not to be an isolated incident.  A second bald eagle and a golden eagle have also been turned in with gunshot injuries since February, making for a troubling trend for those who care for the injured birds of prey.

At the University of Minnesota Raptor Center in St Paul, Minnesota, volunteer Terry Headley helped retrieve a bald eagle and bring him to safety. "He's a runner," called Headley as she chased down the bird that was half-heartedly hopping through thick brush between corn fields.

After assessing this lucky bird's condition, Headley determined she was a female who had injuries to her feet resulting most likely from a territorial skirmish with another female. Headley also said the bird's wing was either broken or dislocated which could have been caused by fighting with other eagles or perhaps from being hit by a car. With treatment, doctors said they hope she will heal and be flying within a month. 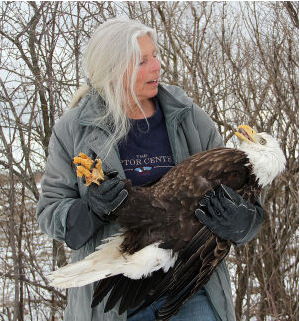 Terry Headley
Another found on the outskirts of Buffalo, New York on April 22, was a male, with the trademark white head, yellow beak and feet and black-brown breast. Unfortunately according to Beverly Jones, assistant director of wildlife service at the Tonawanda SPCA since the fracture healed out in the wild, "the integrity of the wing was completely disrupted, so the bird will not fly again." 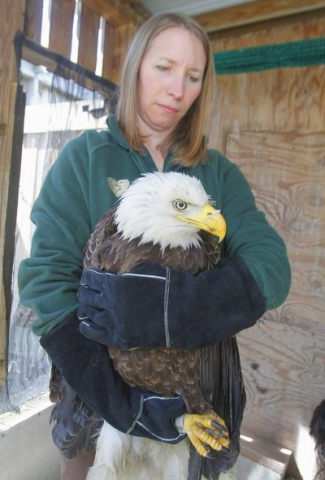 Beverly Jones
Jone's superior, SPCA Executive Director Barbara Carr said, “If we can find the resources, and the U.S. Fish

& Wildlife Service would approve his staying within our educational program, we’d certainly consider it and may apply for a formal permit.”

Special handlers would have to train the eagle for on-the-road educational visits and a special outdoor enclosure would have to be built for him. 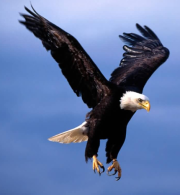 Instantly recognizable as the national emblem of the United States, the bald eagle (Haliaeetus leucocephalus) has long been a key symbol in the human cultures of the Americas. While there is no solid conclusion I could assess as to why more and more eagles are being injured of recent date, there is good news. As a species and while endangered previously, the bald eagle has been removed from the federal list of threatened and endangered species since 2007.

And while they'll continue to be monitored closely, many do consider the recovery of this magnificent eagle to be one of North America’s most successful conservation stories, and a symbol of what can be achieved through cooperative conservation efforts. Now if we can eliminate that shameful breed of 'bald eagle hunter'  from the wild, we can assure our national bird the safe habitats they require and deserve. 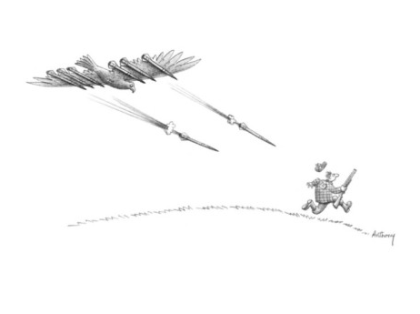 Birds
Conservation
News Stories
Pet Safety
Rescue
Reviews
I Want One! The Cute Owl Animal Video of the Day!!!
Look At The Cute Little Penguin... The Attacking Animal Video Of The Day!!!
10 Special Valentines That Will Make Your Pet Smile
Piper The Dog And His Own "Project Runway"
Comments