Bacon's Revenge (or Please Be Careful Around Pigs)

It has yet to be determined what killed 70 year-old farmer Terry Garner. Perhaps a heart attack hit him at the worst possible time or maybe he simply slipped and fell. Whatever the cause, let's just hope he was dead before his hogs started eating him.

According to Garner's family, he went out to feed his pigs and just never came back. They never heard him so much as cry out. But when they went out to check on him, all that was left were his dentures, lying there in the hog pen.

Other farmers who have been interviewed on the topic of pigs eating their human owners are certainly mournful, 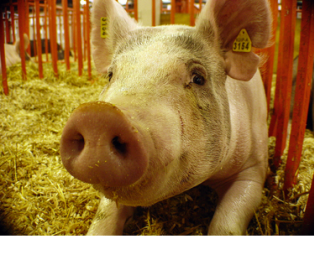 The last thing you see before certain deathyet not overly shocked. Pigs, by nature, are not violent creatures. According to pork farm owner Ian Smith, pigs are simply very inquisitive. "They're just being playful. They're nippers, very inquisitive… they
aren't out to hurt you. You just have to pay them the right amount of
respect."

Pigs are also not choosy about their meals.  When food is in front of them, there's not much they won't eat. Smith goes on to say that if a farmer were to ever fatally fall, the pigs would not much care for the farmer's condition. They would sniff and prod, taking nips out of curiosity but then "once they drew blood from you, you would be like shark bait."

What's even grislier is the fact that this is not an isolated incident. Throughout history, pigs have been known to eat humans, other animals and anything else that happens to fall into their slop.

Makes you think a bit differently about how scrumptious bacon is, doesn't it?

Hold The Butter: 132-Year-Old Louie the Lobster Returns To The Sea
Don't Play Jazz For Your Cow: How Specific Genres Of Music Affect 9 Animal & Insect Species

Drunk In The Trunk: Elephants Go On Rampage With A Snootfull
Comments