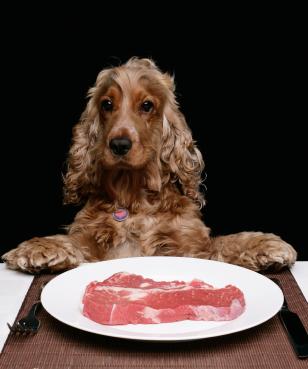 Raw food diets are becoming more popular, especially with dogs and cats!: image via http://www.dog-obedience-training-review.com/The House of Delegates of the American Veterinary Medical Association (AVMA) met on Friday, August 3, 2012, and passed a policy against the feeding of raw or undercooked meat to cats and dogs.  Recognizing that raw food diets are becoming more and more popular among pet owners...

... the policy states that the AVMA, nevertheless, discourages raw diets due to the risk of illness in both animals and people, particularly salmonella and listeria bacteria.

The debate over raw food for cats and dogs has been ongoing between veterinarians and animal dietitians, the latter group claiming that pets who are fed diets that mimic their natural diets in the wild have more energy and fewer health problems.

Consumer responses to the announcement on the AVMA blog have been largely negative regarding AVMA's passage of no-raw-food policy, accusing the veterinarian's group of 'catering' to the big pet food manufacturers, and claiming the group has not done its research.  Some suggest that this is the AVMA's first step toward calling for a ban on commercially prepared raw pet food.

Raw food believers are a very vocal group.  If the AVMA is going to push for legislation banning raw foods, I'm putting my money on the raw pet food consumers.