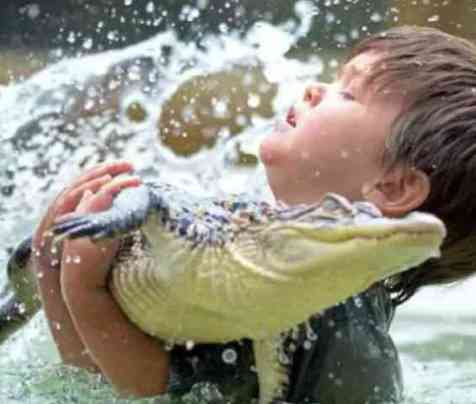 Three-Year-Old Charlie Parker Wrestling An Alligator (You Tube Image)alligator. Before you have a heart attack over this, that is
a juvenile gator by the name of Gump and his jaws are clamped shut. Dad
is also close by just in case.

Charlie has been growing up around the sanctuary, which has been run by three generations of his family now, and is adept at dealing with reptiles, including boa constrictors more than twice as long as he is tall. His family hasn't been encouraging him to do this, it just happens that he loves being around the reptiles.

It is Charlie who calls himself Australia's youngest wildlife ranger. In addition to being able to wrestle with Gump, Charlie also shows a softer side as he cradles the gator in his arms and then gently sets him down on the bank. It is obvious that he is a chip off the old family block and ready to go into the family business before being ready for kindergarten.