The Art of Elephants Panned By Critics?

A lot has been documented about Suda, the artsy elephant, ever since she first picked up a paint brush at the ripe of old age of 4 and painted what appeared to be a self-portrait. Residing in the Maetaeng Elephant Park in Chiang Mai, Thailand, while this video doesn't use any special effects or trickery to display Suda's artistic ability, similar elephant paintings like this have been critiqued by the The [AEACP] Asian Elephant Art & Conservation Project and TEAG [The Elephant Art Gallery] as not being genuine art.

According to the AEACP, elephants creating

this type of artwork are more or less rehearsed like they're trained to perform in a circus. Although these animals may appear to be painting, it's believed they are not really putting brush to canvas in any meaningful sense of the word. In stead, they have been painstakingly trained to replicate and receive a good amount of prompting throughout the process from their mahouts (trainers).

Desmond MorrisZoologist Desmond Morris was quick to point this out after he and scientist Richard Dawkins traveled to Thailand in 2008 to investigate the "elephant painting" phenomenon: "It emerges that each of the so-called artistic animals always produce exactly the same image, time after time, day after day, week after week."

In fairness to the elephants of the Maetaeng Elephant Camp in Chiang Mai, however, while you can actually see the mahout guiding the elephant's trunk in the above video, the video of Suda does not show her being prompted in such a fashion.

How to Spot a Fake Elephant Painting

On the other hand, TEAG notes that even when mahouts are not prompting the elephants during these painting demonstrations, they may have nonetheless been taught to use repetitive strokes so that each self-portrait or paintings of flowers just become duplicates of what they produced hundreds of times before.

TEAG also agrees with AEACP that elephants that paint like Suda really don't have the faintest idea what they are painting. What would be considered true elephant art is when an elephant doodles in the sand - which is a natural gift and a sign of intelligence. But the training required to take them from that to painting real-life images on a canvas with a paint brush is minimal.

As a caveat however, a TEAG spokesperson noted that their "comments are not meant as a rebuke of the elephant camps that are doing this - the fact is that in some cases selling these paintings raises money for the elephants under their care, which is great."

To Feed or Not to Feed the Elephants

Being informed about these practices are important. If the elephants who are being tasked to paint are treated cruelly during the training process, one should think twice about purchasing souvenirs of this type. If however, these animals are being treated humanely and the funding actually does go towards the elephants' upkeep and improvements to their habitat, then you might think differently about supporting the cause. To determine the difference, it's always wise to ask the mahouts probing questions -  the next time you see an elephant near an easel and paint brush! 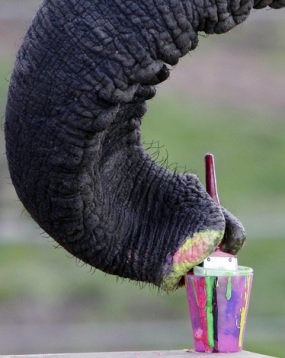