Are Horse-Drawn Carriages Riding Into History In New York City?

The horse-drawn carriages of Central Park in New York City have become
an iconic image for tourism. That tradition, which began in 1935, may be
on the way to extinction if the Big Apple's new mayor has his way. Bill
de 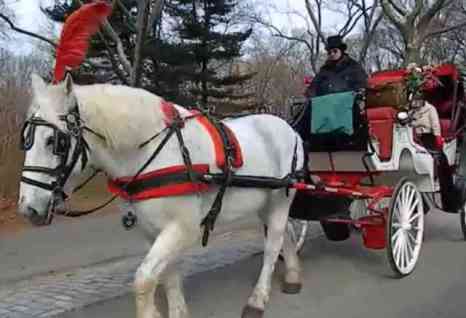 Horse and Carriage in Central Park (You Tube Image)Blasio took office on January 1, 2014. To get himself elected, he
promised to end the traditional carriage rides. The idea is pitting
traditionalists and animal rights activists against one another.

The carriages are a huge draw for tourism in the city as many tourists consider taking a ride through Central Park as a "must see." They look forward to the experience as a main part of their vacation. A tour of the park is also considered a major romantic experience with that special someone. It is $15 million a year industry and the removal of it is not going to be taken lightly.

There are rules regulating the carriage industry and they are created and enforced by the city, not the industry itself. Horses are not allowed to work more than 9 hours a day, and every year spend at least five weeks on vacation on a farm. A vet checks out each horse twice a year and city inspectors visit regularly. Among other regulations there are limitations on the extremes of temperature that the horses are allowed to work in. 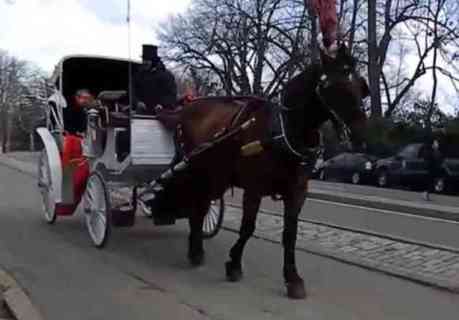 Horse and Carriage in Central Park (You Tube Image)On the flip side of the issue is the concern for the care and treatment of the animals. Despite laws and regulations meant to protect the horses, animal rights activists have long been calling for banning the carriage rides to protect the equines. They also point out that horses do not belong in a heavily urban environment such as midtown Manhattan.

Carriage drivers, (about 200 of them) unsurprisingly, are on the side of keeping the carriages and are threatening legal action to keep their business. They say that this is not really about the welfare of the animals, but the "rights." It is apparently a fine line, but one they feel is important. Christina Hansen, one of the drivers, claims that the animal rights folks are just creating hysteria and placing their own human emotions on to the horses, which distorts the truth.

The new mayor has not only pledged to end this practice, but has also proposed to replace it with vintage-looking electric cars to tour the same routes. This would update the tradition, retire the horses, and give the drivers a replacement business avenue.

Critics of his plan have pointed out that if there is one thing New York City doesn't need is more cars, even electric classic-looking ones.

"People come to us for the clip-clop," said Hansen. "Nobody wants to pet a fender." Also, if animal rights activists are insisting that horses do not belong in Manhattan, does this mean that once the carriages are gone they will turn their focus on the many riding stables that offer horseback riding in Central Park and other areas of the city?