Arctic Snowy Owls On Candid Camera In The Wild (Videos) 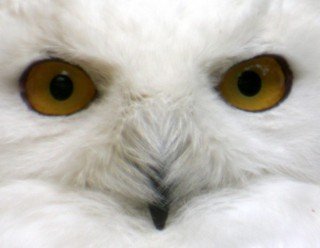 recorded at 101 Hudson Street in Jersey City recently), you probable know how live-streaming can capture the live footage of wildlife in urban settings. But what about out in the wild? Seems like that would present even a greater challenge.

Yet, there is one research team that successfully took on the task in Alaska recently. A high-definition camera fixed on a burrow near the nation's northernmost territory is allowing biologists and bird viewers with an Internet connection to the follow the daily life of a nesting den of Arctic snowy owls.

The camera went live the week of July 4th and is capturing views of the parents and their six chicks who are beginning to emerge from a burrow near Barrow, Alaska, on the coast of the Arctic Ocean!

The project marks the 23rd year of Denver Holt's research on the Arctic snowy owl. Holt is a researcher at the 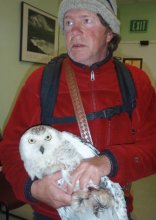 Denver Holt & Snowy Owl Owl Research Institute located in Charlo, Montana. His work documents the Arctic snowy owl, along with the brown lemmings that are the owl's primary prey, within an area of 260 square kilometers in the northern Alaskan tundra.

The camera is the latest addition in the Pearls of the Planet offerings of explore.org, the media division of the Annenberg Foundation, which provides live feeds from cameras directed on wildlife across the world.

Snowy Owls breed only in the Arctic. Adult males are almost pure white and females, white with dark brown bars and spots (mottling). They build their nests on the ground, but usually on a high mound, allotting them the protection to watch for predators. 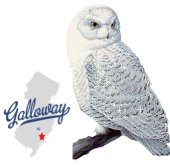 This past year, I was fortunate to view a snowy owl up close and personal, when they traveled as far south as Galloway township in New Jersey. Theories abound as to why there's an "irruption" of white snowy owls this year, but many point to the 'slim pickens' when it comes to this season's lean lemming population in the tundra.

Live cams are an enlightening way to learn about an animal's life cycle without having to seek them out in the wild. The same goes for those birds who seek out urban dwellings in cities throughout the U.S.

Over a two-month period, I watched and documented a mother and father falcon raise a chick from birth-to-flight when they took up their annual residency, high atop of a hi-rise building in Jersey City. The end result was a montage of video segments that I then edited down to a 4:57 minute music video.

Perhaps, projects like this might motivate others in the future, to experiment in producing their own home-made documentaries, from the hundreds of over live cams of animals now available in the wild, in zoos and even on top of 101 Hudson Street. I guess Alan Funt was on to something all those years ago. And I'm sure he'd be proud to know that we're using some of his techniques to film some of our favorite animals, candidly as well.

Hummingbirds And Chewed Gum Are Not A Good Combo -- The Stuck Animal Video Of The Day!!!
Fly -- The Animated Animal Video of the Day!!!
Comments