Archaeologists Take On Cat-Lovers In Rome

Among the ruins of an empire, one of the things that the city of Rome is
best known for is the abundance of stray cats. They inhabit such
historical places as the Coliseum. Next to the sacred ruins of the Largo
di Torre 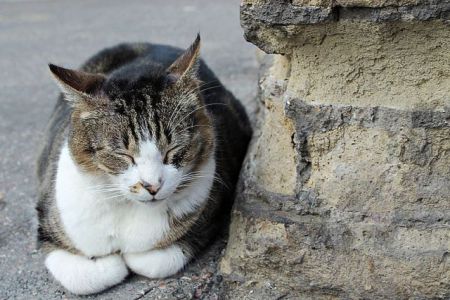 Cat in Largo di Torre Argentina (Photo by Andou/Creative Commons via Wikimedia) Argentina, where Brutus is believed to have stabbed Caesar, is
a popular no-kill cat shelter. Now the archaeologists are demanding
that the shelter close and the volunteers who run the shelter are
refusing to budge.

This clash between history and compassion is testing Rome's notion of  its cultural heritage. The brewing battle is pitting preservation officials who struggle regularly to
get Italians to observe the laws that protect Rome's historic sites against
the gattare, the dedicated and avid Roman cat caretakers and advocates.

The underground shelter has abutted the ruins for twenty years and consists of several bright and airy rooms complete with cages, toys, and medical equipment. The shelter 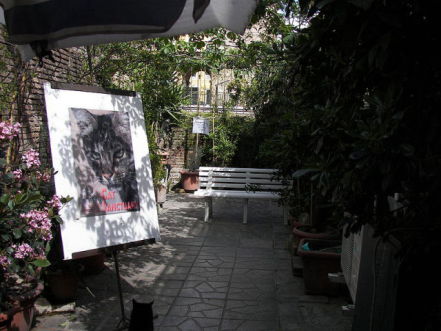 Entrance to Largo di Torre Argentina Cat Shelter (Photo by Wknight94/Creative Commons via Wikimedia)made the mistake of applying for a permit to add a toilet to the site. This brought forth the issue with archaeology officials.

The shelter draws in tourists from around the world who come to see the cats and make donations that support the shelter. The visitors will throw food to the cats as they roam the ruins, just one of the issues that is driving the ire of the archaeologists. Over the past two years the two groups have tried to reach a suitable solution that would serve both sides without success. Moving the shelter would not stem the tide of cats hanging out in the ruins. Cats are creatures of habit and will return to the ruins on their own. Humans are also creatures of habit and the tourists will continue 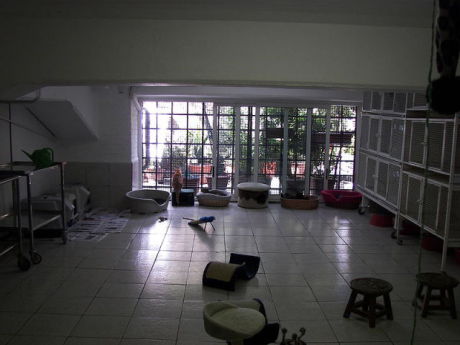 Inside the Cat Shelter at Largo di Torre Argentina (Ohoto by Wknight94/Creative Commons via Wikimedia) to show up and throw food to the resident felines.

Rome has a long history of tolerating and even championing their stray cats. Numerous stray communities large and small dot the city. Gattares look after their local groups and other shelters exist in ruins throughout the city. The difference with these other shelters is that they are legally in residence in those ruins.  The shelter at Largo
di Torre Argentina does not have, and never has had, legal permission to operate in the location. 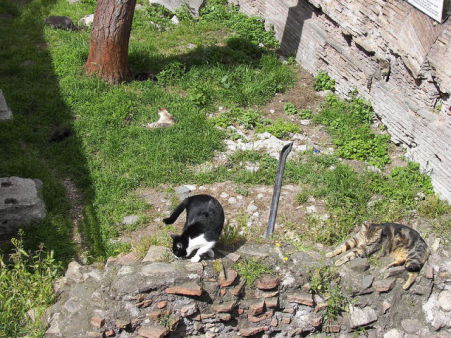 Cats Among the Ruins of Largo di Torre Argentina (Photo by Wknight94/Creative Commons via Wikimedia)Over the decades various municipal administrations have tacitly approved the shelter by allowing it to expand and modernize. Rome's current mayor, Gianni Alemanno, who is up for election next year, has thrown his support behind the cats. While cats aren't allowed to vote, cat people are and will undoubtedly vote cat.

A concrete solution is still far away as history and tradition try to seek common ground. With the lives of so many cats hanging in the balance, it is bound to remain a contentious battle.

The shelter adopts out approximately 30% of the cats. New arrivals are quarantined while they receive  medical attention and are spayed or neutered. The shelter has spayed or neutered at least 29,000 cats. They receive no funding from the city of Rome or any other government agencies or departments. All funding comes from donations.

For more information on the shelter or to make a donation, click here.

8 Signs That Your Cat is Actually a Dog -- The Animal Video of the Day!!!
There Is Nothing Cute About A Cuterebra Infestation

Who's Your Cat's Furrier? Try The Kong Zoom Groom
Dancing Kitties! The Animal Video of the Day!!!
Comments