Arachnophobia Anyone? Spiders In Flight In Brazil

A few weeks ago stunning video was posted to You Tube of the sky over Santo Antonio de Platina,
Brazil filled with spiders. While it almost appeared to be raining
spiders, it was actually thousands of spiders 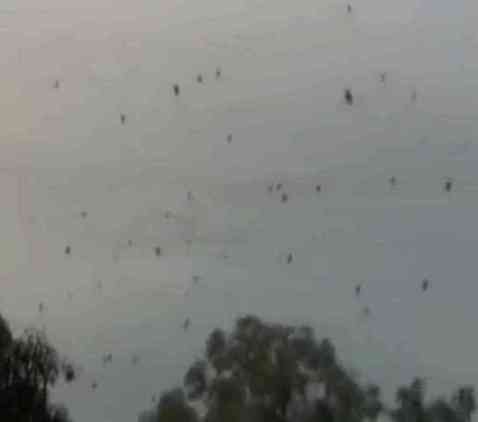 Spiders Filling the Sky (You Tube Image)caught in their communal
web. The giant web had been caught in a large gust of wind, torn loose
from its pinning, and set sailing into the air.

Most spiders are solitary creatures, keeping to themselves in their own webs. A few species, such as the rare Anelosimus eximius are social and build large community webs to catch insects. These webs can reach from the ground into the canopy of trees or buildings up to 65 feet high. Each spider colony can be made up of as many as 50,000 individuals.

The giant web helps keep the arachnids aloft for quite some distance. After their aerial journey the spiders end up deposited in a new area.

As wild as the scene looks to most of us, it is entirely normal. This arachnophobes worst nightmare happens primarily in the area around Sao Paolo, Brazil.

Luck Runs Out For Lucky, A Two-Faced Calf From Kentucky

Return Of The Crocodiles
Comments