Arabian horses are known for their endurance, but few ever guessed that they could do it while swimming 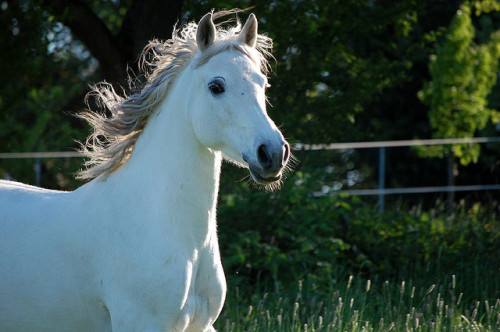 . On Tuesday evening, William, a show horse whose official name is Air of Temptation, was hanging out on the Summerland beach in Carpenteria, California being photographed by students. Suddenly he became spooked, reportedly by a crashing wave, dashed into the water, and refused to return, regardless of what the students and their teacher did to try and lure him back to dry land.

The seven-year-old horse continued to tread water and ended up a mile from shore. Someone finally called Mindy Peters, William's owner. Since horses are not known for being good swimmers and William had never been swimming before in his life, things were not looking good.

Fortunately for William some men on a nearby oil rig spotted him in the water. They were able to alert rescue crews as to his location. With the help of two paddle boarders the harbor patrol was able to strap lifejackets around him, secure him to the side of the boat, and get him back on shore. By the time he was safely on the sand, he had been dog-paddling for three hours.

William, who is estimated to be worth between $100,000 and $150, 000, is currently at the Alamo Pintado Equine Hospital in Los Olivos, California. After his ordeal he was suffering from hypothermia, exhaustion and had water in his lungs. He is expected to make a full recovery and return home in two or three days.

It makes you realize that you can chase a horse into the water, but you can't make him sink.

Horses
News Stories
What’s For Dinner? Exotic Animal Dishes From Around the World!