Booger, Kitty, and Mousie, along with their owner, Greg Pike, were well
known among the buskers along the Pearl Street Mall in Boulder,
Colorado. Their trademark pyramid style amazed patrons of the open-air
mall for 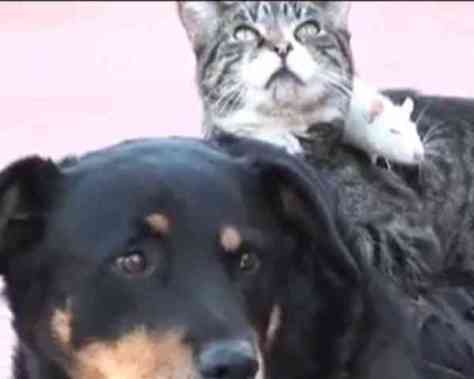 Booger, Kitty, and Mousie in their usual positions (You Tube Image)many years as folks marveled over their unusual friendship
that defied their natural behavior. The act ended earlier this week when
Booger passed away.

Booger, a 13-year-old Labrador-Rottweiler mix, had been raised by Pike since she was a puppy. She was suffering from kidney and liver failure when she died at a veterinary clinic in her hometown of Telluride, Colorado.

Pike started the act shortly after he adopted Booger. At a park in Telluride Pike and some friends were discussing the limits of what was possible. The outcome was a bet by Pike that he could get a dog, a cat, and a rate to get along. He already had a dog, so the cat was the next step. He found Kitty and her littermates under a house in a box. He took her home and introduced her to Booger. Booger adopted Kitty as though the cat was her puppy and the two became inseparable. There have been several Mousies over the years.

Kitty now curls up to Pike much more often now that her best friend is gone.

Aside from Boulder and Telluride, the team had travelled around the country and appeared on Animal Planet's show Must Love Cats. Their video - Dog, Cat, and Rat (below) has had nearly ten million views on YouTube.

Pike will work as a ski-lift operator in Telluride over the winter and in the spring he will spread Booger's ashes from the top of nearby Gold Hill. It was one of Booger's favorite places on earth.

Whatever adventure Pike plans to embark on next, it won't be another dog, cat, rat team. That chapter of their lives is over. Kitty and Mousie are comfortably retired.