Animal Species Speak The Same Language, But May Have Regional Accents 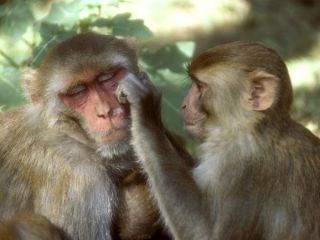 Rhesus macaques: image via nationalgeographic.comHumans born in Hungary speak a different language than those born in the Philippines if they are born into a native family.  But what about dogs born worlds apart?  What about birds or monkeys?  Two University of Pennsylvania (U of P) researchers are exploring these questions and the answers they are finding may not be that surprising to those of you more casual animal observers.

Psychologist Bob Seyfarth and biologist Dorothy Cheney from U of P conducted an experiment using macaques monkeys, a very talkative species to be sure.  They switched a pair of rhesus macaques, natives of South, Central and Southeast Asia, with a pair of Japanese macaques at birth to see if the pairs, who tend to use the same sounds (coos, gruffs, barks, and screams), but in different contexts, would change their patterns of use if they were raised by different parents.

Seyfarth and Cheney found that the pairs patterns of language use was not affected by those of the parents who raised them nor their playmates; a rhesus macaque would coo and gruff in the same situations whether he was raised by rhesus macaques or Japanese macaques, as would a Japanese macaque follow his genetic programming.

But there are species that speak their own language prescribed by genetics, but can also learn regional sounds, inflections or, as humans would say  accents.  These can help to distinguish where the species originate.

Ofer Tchernichovski studies bird communications at Hunter College and says that songbirds are great learners and that some, like the nightingale can pick up dozens of songs after hearing them just a few times. While songbird species share the same 'vocabulary' of sounds, they use them differently depending on the region where they habituate.  This lets ornithologists know exactly where the birds are from.  Interesting, isn't it? 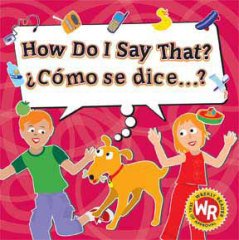 Dog trying to learn Spanish: image via garethstevens.comThough other species may acquire 'accents,' like dolphins, whales, hummingbirds, and bats, most species are more like macaques, which understand 'regional accents' of their species, but do not copy them.  Think about how many human languages dogs can understand, but they never do copy them.

Ever hear a dog speak Spanish? Not including the Taco Bell dog, I mean.