Seems like Katy Perry has had an on-again off-again love fest going on with one animal rights group, namely: 'People for the Ethical Treatment of Animals' (PETA).  When previously married, she was championed by PETA for her vegetarian lifestyle with ex-husband Russell Brand. Three years later, she is being condemned for using animals in her jungle-themed music video.

Around Christmastime, 2010, Perry told the Italian magazine Grazia she and her hubby planned to celebrate the holiday by gathering around a a pink Christmas tree while extending yule-time greetings, peace and goodwill to "turkeys." And to mark the event, they would dine as vegans versus carnivores. For that effort, PETA's blog post titled: "Katy Perry's Dreaming of a Vegan Christmas" lauded the singers' commitment to saving animal life.

However, with Perry's latest single release of the now-top-forty hit, "Roar," PETA has reversed their opinion of the songstress. Adamantly speaking out against Perry's visuals and the use of animals in the video. "Roar," shown here, Perry's jungle scene is found questionable, where she is found interacting with a tiger, an elephant, monkeys, tarantuals and exotic birds.

PETA, which has long protested the entertainment industry for training "animal actors," took issue with these animals being used as props in the music video. 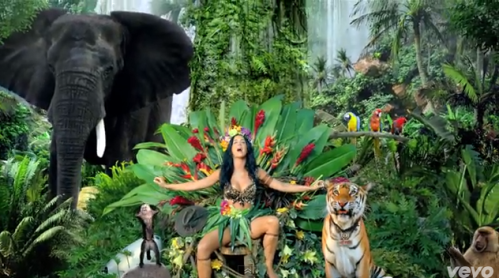 PETA's postion on Animal Actors
According to a Huffington Post report, Perry may have used a company which is under close watch, saying, "The Serengeti Ranch, the animal exhibitor that we believe supplied the animals for the 'Roar' video, has been inspected by the U.S. Department of Agriculture 22 times since 2001."

However in viewing the video, to my eyes, it appears there is more computed-generated imagery (CGI) effects than there is actual live footage of the animals, as evidenced in this visual, where Perry's "roar" actually projects itself into appearing briefly as a competing tiger.

Perry, known as an avid animal lover, it's hard to believe the singer would purposely be involved in any project where animals could potentially be harmed. On her 27th birthday, she organized a donation initiative to benefit the American Society for the Prevention of Cruelty to Animals. [For fellow animal lovers, donations for the ASPCA can be made here.]

Katy Perry supports the ASPCA
So weigh in readers. Is PETA in an over-reactive mode, or has Perry overstepped boundaries? If one was to ask Kitty Purry, by the looks of it here, I don't think she would object too much! Your thoughts? 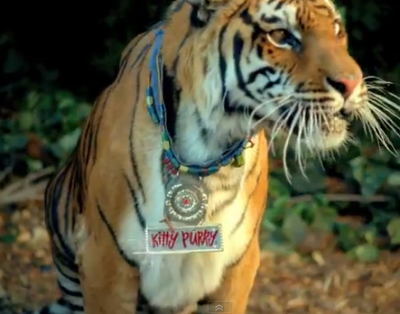