Mandy The Goat And Mandy The Dog: Animal Heroes

You never know when something bad is going to happen and when it does
you hope that your friends are the sort who are going to be there for
you. When Noel Osborne, a farmer in Australia, was knocked over into a
pile of manure by one of his cowsn back in 2002 that is when he discovered who his
real friends were. 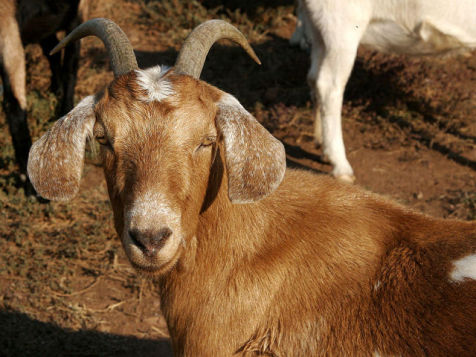 Osborne, 78, was badly injured with a broken hip and unable to move. He was left out in the open in the brutal Australian weather -- very hot days, bitterly cold nights, and storms. Fortunately he had been discovered there by two of his friends. Mandy, his collie, and Mandy, his nanny goat, came to keep him warm in the cold nights. Osborne had managed to find a container and the goat was patient enough to allow him to get enough milk to keep himself fed and hydrated.

During the five days that he lay there without human help the two Mandys watched over him, kept him company, and warmed him. At last some human friends stopped by to pick up a kid goat and they discovered Osborne indisposed in his pile of manure. Unable to move him they called an ambulance.

The old farmer was far enough gone by then that he remembers little of his final rescue. He recovered completely from his ordeal and credits his animals with saving his life-- particularly the goat. He swears now that goat's milk is the elixir of life.

While Osborne may not have shown much imagination in naming his pets, he certainly showed a great deal of skill in choosing his animal friends.