A report from the CDC last year listed cows among the most dangerous
animals out there. They look so docile hanging out in a field chewing
their cuds that this can seem hard to believe. Several years ago Fiona
Boyd of Kirkcudbrightshire in Scotland would agree with those findings
after she had a major run-in with one of her 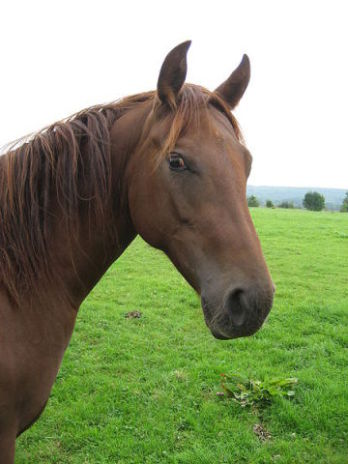 Chestnut Horse (Photo by evelynbelgium/Creative Commons via Wikimedia)cows. Another of the most
dangerous animals on the list, the horse, stepped in to save her life.

One day she was trying to get a calf in distress into a shed when its mother took exception to her actions and charged her, knocking her to the ground. As Boyd tried to scramble out of the way the cow took aim and butted her again. Boyd was in dire straits when the cow then fell on top of her.

The woman was terrified that this was going to be the end of her. She rolled up into a ball too try to protect her head from the hooves. It was then that her 15-year-old chestnut mare, Kerry, came running to the rescue. The horse kept kicking at the cow until it moved away. Boyd was then able to crawl away and under an electric fence. She has no doubt that Kerry's actions saved her life.

Boyd, 40, and a mother of two, was taken to hospital where she was treated for severe bruises and cuts and then released. She admitted later that though cows are normally placid creatures they become very protective during calving season and that she shouldn't have tried to move the calf on her own.

It hardly needs to be said, but Boyd won't be trying that again -- at least not without Kerry standing by.