It was just six hours after Lee and Elizabeth Littler brought Hercules
home from the animal shelter that the dog started going crazy. He was
growling and went tearing right through the screen door. Their dismay
turned to 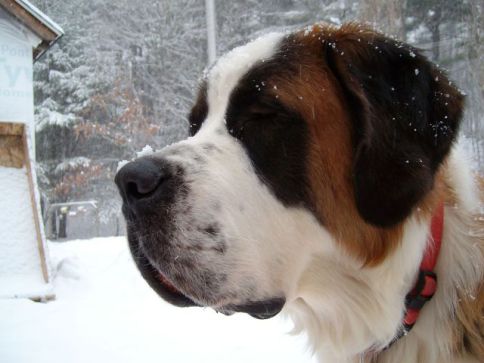 Saint Bernard Dog (Photo by Ofrockwood/Creative Commons via Wikimedia)gratitude as they realized that the dog chased away a would-be
burglar that had been trying to get into their home through the
basement.

It happened when the Littlers were preparing to take Hercules for his first walk with them. The 135-pound Saint Bernard hadn't made a peep all afternoon. So when the dog suddenly went nuts they were totally surprised. Then they saw that the dog was chasing off an intruder that had been working at getting the door to the basement open. The man did not leave unscathed, Hercules managed to get a bite in as the man climbed a fence to get away.

When the police arrived they discovered that the phone and cable lines had been cut. This leads one to wonder how bright the burglar was in the first place, since most people have cell phones now. He also was doing his sneaky work when everyone was home.

The Littlers were now even gladder that they had brought Hercules home. It had been love at first sight when they saw the poor dog. He was underweight and in pretty bad shape. They had originally taken him home to be a foster dog to get him back on his paws so that he was more adoptable. They couldn't stand the thought of him being euthanized.

With that one act of loyalty and bravery Hercules found his forever home. The Littlers had fallen in love at first sight, and they knew he belonged with them forever at first bite.

Italy's Pets Are The Fattest Of Them All
Comments