Animal Controversy: An Autistic Boy And His Therapy Chickens

It has been an emotional couple of years for the Hart family. Once their
youngest son, JJ, was diagnosed as autistic they committed themselves to
doing whatever they needed to do to help him. After being advised to
try an 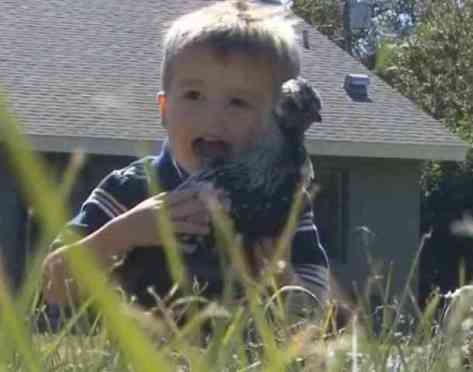 JJ and one of his chickens (You Tube Image) organic diet they decided to raise their own chickens for a steady supply of eggs. Once they
had installed the chickens in a coop in their back yard they discovered
the true benefit the birds brought with them. JJ started opening up and
communicating, first with the chickens and then with them.

As wonderful as this was for the Hart's, it came with a tremendous downside -- the area where they live in DeBary, Florida, is not zoned for agriculture. After an anonymous complaint in 2012 the Hart's were told that they had to dispose of the chickens. Before the Harts could act the chickens were slaughtered there in the yard that October. To be fair, there is a chance that the birds were killed by animals rather than by vindictive humans.

Outraged members of the community began campaigning for people to be allowed to keep a limited number of chickens in their yards. In 2012 the DeBary city council voted to give the Hart's a one year allowance while they 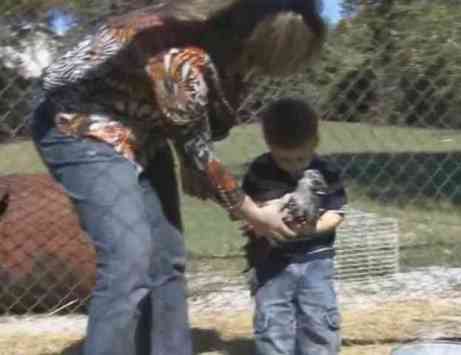 Mom helps JJ get settled to cuddle a chicken (You Tube Image)considered the problem. Earlier this month they voted to ban the chickens and the Harts were given notice that the chickens must be disposed of by December 31st.

The Hart's reached out to the nation for support for their son and his chickens. After a report on the issue on the Today show, as well as a threat of a lawsuit from the family's attorney, the DeBary city council has backed down. They are planning an additional vote on December 18, at 6 p.m., in which they are expected to allow 3-year-old JJ to keep his friends and therapy partners, at least as a special accommodation for this case only.

The mayor of DeBary, Bob Garcia, has gone on the record as being in favor of the special accommodation in this case. "I always felt that it was a violation of a person's rights," he said.

For JJ the chickens have helped him learn to connect with the world around him and begin communicating rather than just throwing temper tantrums out of frustration. Now it appears that Snow, Cinnamon, and Ginger get to remain a part of the Hart family -- and it looks like they are all going to have a very merry Christmas this year!

At Christmas Even Adults Are Kids

A Falcon Sharing Food With a Dog? The Animal Video of the Day!!!
Spotting Signs Of Illness In Birds Early Can Be The Difference Between Life And Death
Comments