The title of this blog uses an extreme metaphor to underscore the heartlessness of an African huntress, who not 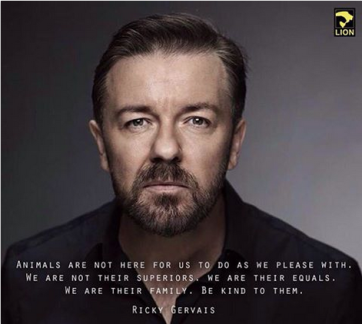 Ricky Gervais only revels in her senseless killings of defenseless animals but glorifies her action in a graphic photo. Gervais’ verbal assassination of her is considered by many as a ’justified’ execution.

Realty TV show ‘Extreme Huntress’ launched in 2010 presents its titled actress Rebecca Francis photographed grinning ear-to-ear as she lay on the ground next to a giraffe she killed in Africa. Subsequently, this photo has put her front and center in the crosshairs of an aggressive backlash spurred on by a well-known celebrity. 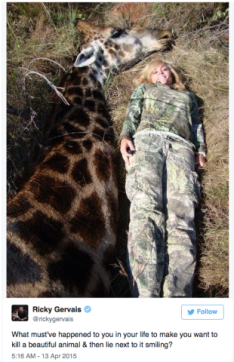 rked an onslaught of threats and outrage from his 7.5 million followers. The sentiment expressed by Gervais regarding the actions of Francis was abhorrent to the majority who learned of the incident: “What must’ve happened to you in your life to make you want to kill a beautiful animal & then lie next to it smiling?"

Responses in the form of 'hate' tweets like the ones posted by MistaHippyDalek (@DirtyHippyDalek) and Chuck P. (@chuckyp8) grew more and more accusatory as tens of thousands of them rolled in.

On the flipside, folks like Kevin Paulson, CEO and founder of HuntingLife.com felt that the reaction was overplayed in the media: “Ricky Gervais has 7.5 million Twitter followers, so he is able to incite an audience against her and so the attack this time happens to be a bit more strong.”

Francis who also appeared on the series ‘Eye of the Hunter’ tried to justify her actions by indicating the giraffe was already close to death.

However, the question that arises — if that be if that be the case — was her killing a justified killing? Was she doing the animal a service by ‘putting him out of his misery’ or simply looking to 'gain financially’?

In a statement she wrote: "He could either be wasted or utilized by the local people. I chose to honor his life and I do not regret it for one second."

“In Africa, when we go to go hunt there, we're paying a certain number of dollars for each animal," Paulson said. "Part of that money is being used to actually provide the conservation for those particular animals."

Francis has been criticized often in the past for uploading images of her kills, but her supporters insist this hunt had a meaningful purpose. "With this particular giraffe, she knows that she's providing enough meat to almost feed that village for a month and so she's accomplished something and it's something to be proud of," Paulson said.

Gervais, as an animal rights activist dismissed the notion of equating hunters with conservationists. From where he sits that idea is comparing apples to oranges.

"Why couldn't you give the money and not shoot it?" he said. "Let's put this in context. Imagine someone saying, 'There's a guy, he's going to give $1 million to cancer research, all he wants is to shoot one cancer patient.'"

As far as conservation, there are currently some very startling statistics. if we look at the numbers. More than 140,000 giraffes roamed Africa in 1999

according to the Giraffe Conservation Fund. That number is now fewer than 80,000.

For those interested in ‘saving’ versus hunting giraffes, please consider donating to the GCF or adopt one through the World Wildlife Fund organization. For a $55 donation you will receive an adoption certificate and species card in addition to a photo and stuff animal.