Who says that black cats are unlucky? Janet Rawlinson is one lucky woman
and she has a black cat to thank for it. Her normally aloof
two-year-old puss, Tomcat Slinky Malinki, went out of his way to save
her life after she collapsed on the floor of their home, drifting in and
out of consciousness. It was truly her lucky day. 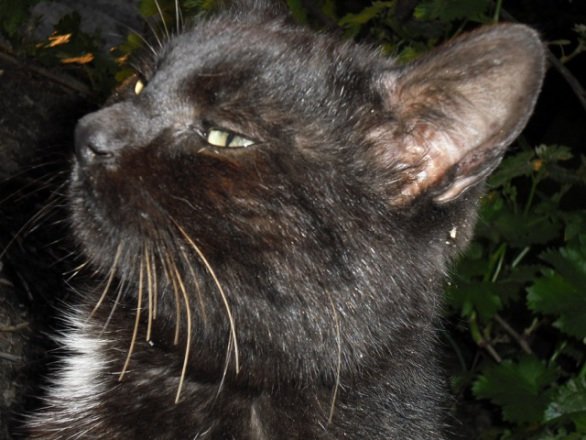 When Rawlinson, 48, retired from nursing due to health issues, Slinky Malinki started keeping a closer eye on her. It was a good thing he was because his human recently collapsed after suffering an adverse reaction to morphine. She lay on the floor for five days, drifting in and out of consciousness.

Slinky dispensed with his aloof style and turned to trying to get the attention of the neighbors, Mel and Stephen Sharp. At first the cat tried tormenting their dog. When that did not have the desired effect, Slinky went over and started rapping on the window with his paw.

It was then that the Sharps realized that they hadn't seen Rawlinson for several days. So they hoofed it over to her house with the spare key. When they found her they thought she was already dead and were much relieved when they were able to bring her around.

Slinky has been more attentive since Rawlinson's rescue. He will check on her every couple of hours and if she does not respond right away he will tap her on the arm or leg. It is a behavior he had never shown before the incident.

The cat has now become something of a celebrity and he has been nominated for an award by the Cats Protection charity's National Cat Awards in London. If he wins he will also have a chance of winning the prestigious title of National Cat of the Year.