Animal Intelligence: Is Your Dog Or Cat Smarter Than You?

There are many intelligent species in the universe. They are all owned by cats. ~ Anonymous 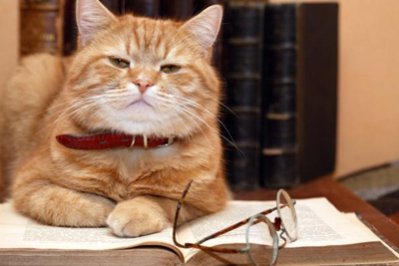 Based on my exhaustive research, your conclusion is erroneous. In addition, it is also wrong.
Photo Source: Coourbox

How can animal intelligence be appropriately measured?  It can’t fairly be compared to that of humans even though sometimes, alas, cats and dogs do seem smarter than their owners. Do animals have an understanding of the world around them? Can they learn from past experiences? Although this has long been considered a complex indicator of human intelligence, psychologist, Thomas Zentall, from the University of Kentucky firmly believes that the concept of episodic memory  (the ability to recall past experiences) is not limited to the human brain. 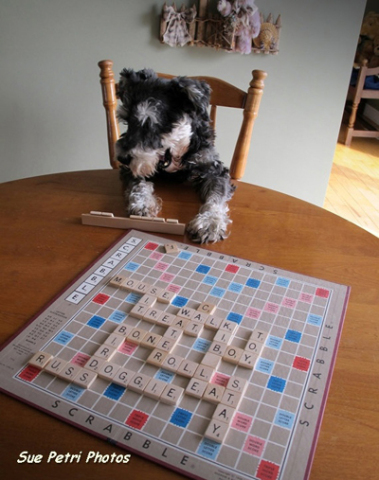 A vowel, a vowel. My kibble for a vowel!
Photo Source: Sue Petrie Etsy.com

Mental time travel has always been associated with humans, but it just might be that the human race has been underestimating for a very long time the plane of existence, interaction and true comprehension animals possess about the world in which they live. The idea that animals are capable of planning their own behavior is an interesting and rather uncomfortable concept. Perhaps for cat owners, if there ever was a cat that could be owned in the first place, this isn’t so, as the feline mystique is fraught with subtle agendas and clever subterfuges to punish human co-inhabitants who don’t perform as expected. 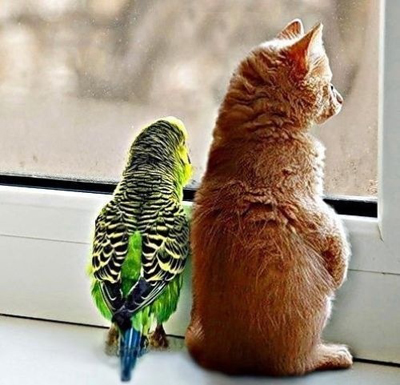 Hymie, the dog is toast. They'll never figure out  what happened to his crunchies.
Photo Source:Suzi Pannenbacker

According to Zentall, several animal species such as primates, dolphins, scrub-jays, rats and pigeons have demonstrated the skills of mental time travel based on episodic memory. Scientists still are at odds about the validity of this idea and while many other researchers do not agree with Zentall, he does have his coterie of supporters.

In the words of Michael Corballis, a psychologist at the University of Auckland: “Mental time travel has neuro-physiological underpinnings that go far back in evolution, and may not be, as some (including myself) have claimed, unique to humans.” 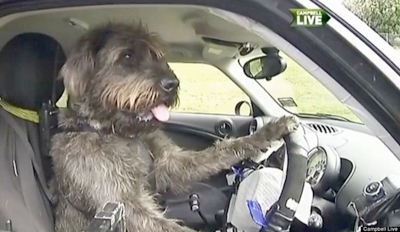 It is human nature to believe your pet is the smartest; we all do it just as we look at baby pictures and swear there’s an Einstein or Madame Curie buried behind that adorable and usually toothless smile. For dog and cat owners, however, this debate is as futile as attempting to count the waves on the ocean due to the diverse psyches and temperaments of the two species.

Dogs have the intelligence to perform tricks, but it must be remembered that they are pack animals (link to discover mag) and as such have an inherent need to please and receive praise from the alpha dog (master in this case). The cat, on the other hand, is its own person so to speak, and as Mary Blye so aptly put it: You call a dog and it comes to you; you call a cat and leave a message and maybe someday they will get back to you. 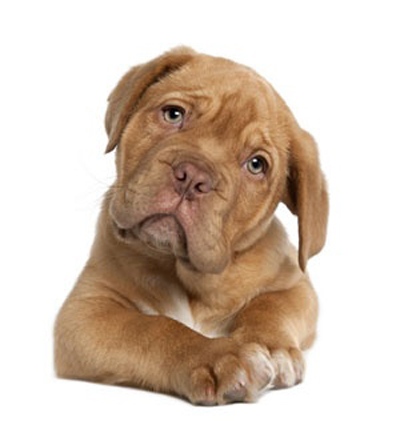 Both dogs and humans have the same brain structures responsible for producing emotions and the same hormones and chemical changes that occur under stress. Humans and canines even share the hormone oxytocin, which concerns love and affection. Some say a dog’s emotional spectrum is like a child of about two and one half years. 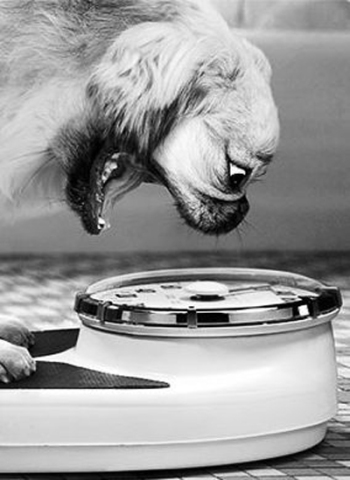 Oh MyGawd! No more late snacks, Leon, until I can get some of this weight off!
Photo Source: Ninaohmanarts

Cats  are clever, resourceful, self reliant and highly adaptable, but no one owns a cat …ever! Despite this, cats can be trained to perform, but they won’t do it for simple pats on the head or praise. Known as operant conditioning, a cat will repeat a desired behavior for its caretaker in exchange for a yummy food reward. When trying to understand the feline psyche, it is important to realize that the species has survived down through the ages in diverse environments. This has made them crafty and not so easy to fool. 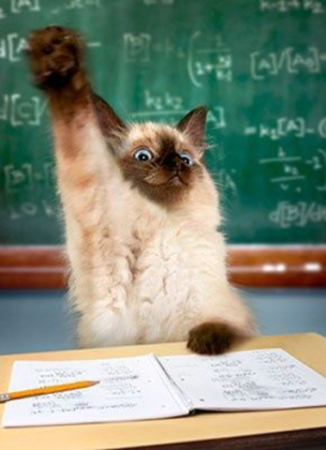 I know it, I know it.…Please call on me and not the dog. Please…

Cats have a unique kind of intelligence as they learn differently than either dogs or humans. Cats have excellent memories. This is especially true of any incident that has incited fear. One unpleasant encounter with a growling dog, for example, can make a cat avoid dogs forever. Positive experiences are also powerful, especially if they are related to food or playing.

Animal minds are still a mystery, but beyond the darkness there lies a frontier yet to be explored and evaluated by science and technology. If it should turn out that one day our pets rule the world, we can only wonder if can they do any worse than any humans have done?

This is a question to ponder whether near or yonder, about where intelligence really lies.