For anyone who remembers Paul Anka’s ballad dedicated to Annette Funicello back in the 1960s, or the revival 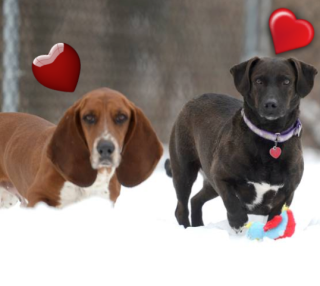 by Donny Osmond in the the 70s, the term 'puppy love' refers to young love often experienced by sweethearts in their adolescence. While sometimes used in a derogatory fashion associated with infatuation, Sigmund Freud was far from underestimating the power and the proverbial durability of one’s first love.

This year, as we approach Valentines Day, ‘puppy love’ might also refer to the love of two actual dogs, who seemed to have connected almost as soul mates. For Roscoe and Clover, a series of harsh life events led them to find each other at the Ramapo-Bergen Animal Refuge in New Jersey, where they immediately bonded and have been inseparable ever since.

Paul AnkaRoscoe, a basset hound just over 4-and-a-half-years old, and Clover, a 7-year-old corgi-lab mix, now board together, where they are almost always found snuggling on their heart-shaped pillow.

Historically, neither of the pups had it easy before they made their way to the rescue center, according

to the shelter’s lead trainer Jayne O’Connor. Roscoe was likely an outside-dog and has a fear of men that might be indicative of a traumatic experience. Clover was rescued from a hoarding situation where a woman had more than 80 dogs living together.

Jayne O'Connor“You always try and get dogs to play and socialize once they come here,” O’Connor said. “It’s a process. In general, you might pair up a dog that is nervous with one that is outgoing. (In turn) the nervous dog can see that calm demeanor and pick up those social queues.”

But Roscoe and Clover were different — they only had eyes for each other. Instead of the typical “outgoing-introverted relationships that form at the shelter,” O’Connor said, the two dogs gravitated to each other, even though they are exceedingly shy around humans and other dogs.

Because of the bond the two dogs have created, O’Connor said the rescue shelter is hoping to find owners who would consider adopting Roscoe and Clover as a pair — and they are willing to charge only one adoption fee if they’re successful in finding such a match-up.

Ideally, O’Connor said, the home will need to be calm, and female-centric due to Roscoe’s history. She said the two dogs would love a yard and a space for them to continue to play, eat and sleep together.

Anyone interested in adopting the two dogs should visit rbari.org, O’Connor said.

Clover, Roscoe & Jayne O'Connor
“We’re looking for that special home, and we know it’s out there,” O’Connor added. “We want someone who ideally is kind and caring and will give them the freedom, and security, to be who they really are.” Now, if that's a a tale that warmed your heart, perhaps you might be interested, or know someone who'd really appreciate bringing some puppy love into their home, this Valentine's Day.