An Olympic Souvenir You Don’t Want: Goldfish In A Key Ring

British tabloid The Daily Telegraph is reporting on an unusual piece of merchandise being sold on the streets of Qingdao, China, just a few weeks before the Olympic Games begin:

A plastic bag with a picture of Huan Huan, one of the cartoon mascots of the Games, on the outside. And inside: a live goldfish. The bag is part of a plastic key ring. According to the Telegraph story, the bags are sealed, so the fish live in a small pool of water, with little access to air, and no food whatsoever. The goldfish key rings are, of course, not a piece of official Olympic merchandise.

The story quotes a spokesperson from the United Kingdom’s Royal Society for the Prevention of Cruelty to Animals calling the key chains a gimmick which “show no respect for the animals at all,” though there’s no record of the story on the RSPCA’s web site. A manufacturer of the key chains could not be identified. This could mean the entire thing is a hoax, although there is a picture here of something that looks like a live goldfish in a tiny plastic bag. 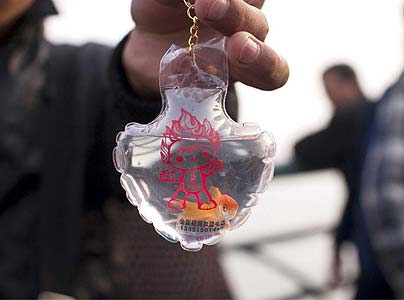 This is not the first “animal cruelty” situation linked to China. Another British media organization, 24-hour TV news channel Sky News, reports small restaurants serving dog meat will be shuttered during the Olympics, to avoid offending visitors from the U.S. and Europe.