It is a sad sight to see one's favorite patch of woods or flowery meadow succumb to the developer's bulldozer.  But hey, people have to live somewhere and wherever you live, it was once woods or meadows too.  What is more disturbing is to see places that are protected as parks and reserves lose their unique plants and wildlife to causes far more insidious, and ultimately more destructive, than a bulldozer. One of these causes in general is invasive plants and animals introduced accidentally (or in more cases than can bear thinking about, deliberately) from foreign lands.  One Asian pest in particular that is wreaking billions of dollars in damage to our forests is an otherwise pretty little beetle called the Emerald Ash Borer (or "EAB" by those so busy combating it that they don't have the time to spell its name out.)

Emerald Ash Borer (Agrilus planipennis is its scientific name) is in a group called "Jewel Beetles" because of their bright, shining colors.  There are hundreds of native species in North America and very few of them cause significant damage to living trees (although some are destructive of cut timber, the timber industry has in large measure reduced its losses by cutting timber when the adult beetles are not around.)  Emerald Ash Borer is of a different stripe from our native Jewel Beetles.  They kill living ash trees by the tens of millions.  They were first discoved in Michigan in 2002 and have cut a swath hundreds of miles east and south, killing ash trees as they go. The adult beetles can fly but their spread has also been aided by people moving infested wood around, which is almost certainly how they got here from Asia in the first place.  There are no effective methods of stopping the critter and efforts are aimed at trying to slow its advance through quarantine -- you may have seen signs prohibiting bringing firewood into parks - - EAB and other exotic wood borers are behind this rule. But the effort to contain EAB has been hampered by their elusiveness. They are small and hard to find.  Their presence is usually discovered when the ash trees start dying and by then it is too late. 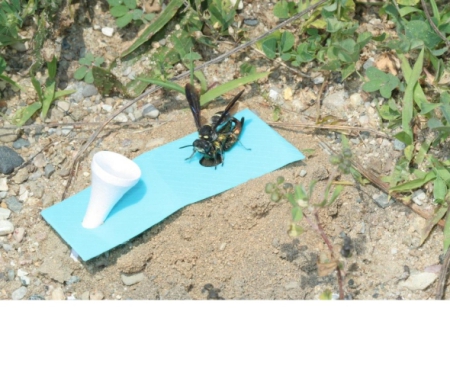 But entomologists and forestry agents are a clever lot and they realized, led by Dr. Stephen A. Marshall and Philip Careless of the University of Guelph, Ontario,  that our wasp's super powers for detecting and capturing Jewel Beetles could be harnessed for the good of mankind.  They began a campaign to get their colleagues to locate colonies of our wasps (our wasps like to hang out together, although they are "solitary wasps" by definition, meaning they don't have queens and each wasp is out for herself and her own offspring).  The crazy thing is, it isn't really that hard to find our wasps because they like to make their burrows or nests in places where people go  - -  unpaved parking areas in parks, the edges of little league baseball fields and untrimmed spots in cemetaries. (It is a fair question to ask where our wasps lived before there were people to make parking lots and ballfields for them.)  And once you find the wasps, you will find the Jewel Beetles they are catching.  And if Emerald Ash Borers are around, our wasps will find them. 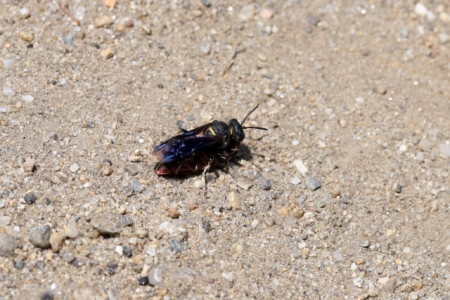 So a network of volunteer citizen scientists has sprung up to monitor our wasps and their Jewel Beetle catches.  Depending on the area, our wasps are busy catching Jewel Beetles for about 5 to 6 weeks in summer.  Where I am monitoring them in Ward Pound Ridge, NY, they are catching beetles from late June to early August. All of the volunteers work under the guidance of pros who instruct them on how to capture the wasps and preserve the beetles for later identification.  Our wasps are unharmed by the process and, although we are taking food from their babies, they seem able to find far more beetles than we can take from them.  In fact, they often drop the beetles for very little reason or no reason at all and, once dropped, they always go looking for a new beetle, never, at least in my experience, looking for the dropped beetle.

The group of volunteers I have worked with since 2009 is led by Dr. Claire Rutledge who works in New Haven in the Connecticut Agricultural Experiment Station's  Department of Entomology.  Dr. Rutledge calls our wasps "her lovelies"  but that is a pretty mild eccentricity for an entomologist.  About two months ago, July 2nd to be precise, one of the volunteers working with Dr. Rutledge took his first beetle away from a wasp in the colony he was monitoring in Prospect, CT, which is in New Haven County.  Call it beginner's luck, but the beetle he took from the jaws of the wasp was an Emerald Ash Borer, the first record of the beast in CT. Over the next few weeks, quite a few more were found at this site and nearby, confirming that the beetles are there in numbers amounting to a local infestation, the extent of which needs to be delimited.  Already quarantine measures are being put into effect in the hopes of limiting the spread of the beetle.  Of course it is a good news /bad news story.  Good that our wasp and the volunteer network detected EAB, bad that it has spread to yet another state. 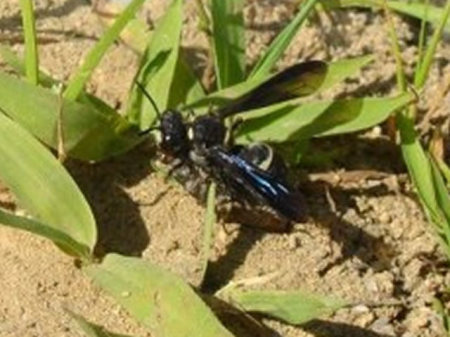 I hope I never find it in Pound Ridge, where the ash trees are already under stress from a disease called Ash Yellow.  The truth is, I would "monitor" the wasp colony at Pound Ridge whether Emerald Ash Borer had ever made it to our shores or not.  I collect beetles and Jewel Beetles are a favorite group of mine and other beetle collectors as well.  Of the hundreds of Jewel Beetles my son Jeff and I have taken away from wasps over the past four summers, quite a few are species I have never seen before anywhere and are considered rare.  In reality, they are probably not so rare but just hang out up in the forest canopy on dead and dying branches where beetle collectors can't get to them but the wasps can.  It is a grand sight to see a wasp emerge from her burrow, do a couple of quick orienting flights in expanding circles above her burrow, and then shoot straight up into the tree tops. (Males, of course, never hunt  beetles or do anything useful in the raising of the young - - like the males of many species, they are only interested in drinking and sex.)

I should tell you that our wasps don't kill the beetles they feed to their underground young.  Rather, they give them a deft sting behind the neck that paralyzes the beetle so their babies can eat them alive. So, I tell myself, I am actually rescuing the beetles from a slow and gruesome death when I humanely dispatch them with ethyl acetate or put them in the freezer.  And even though I have not found EAB, my catches have been adding to the database that Dr. Rutledge and Philip Careless are creating to document all species of Jewel Beetles that our wasp catches. So much basic research needs to be done in order to assess whether this form of biosurveillance can work for other species.  How do the wasps locate the beetles?  Based on what Dr. Rutledge told me, there is apparently a chemical that is unique to Jewel Beetles as a group that the wasps can detect, but more work needs to be done.  Are there species of Jewel Beetles too small for the wasps to bother with? Probably.  Are there  species of Jewel Beetles too big for the wasps to carry?  Again, probably.   Why do the wasps occasionally catch beetles that are not Jewel Beetles at all?  Who knows?  I could go on but it may be that the true value of the wasps' ability to detect EAB winds up being all of the basic research that gets funded in the effort to understand how they do it.  Much of this basic research, by the way, is funded by the US Forest Service which has the primary responsibility for combating Emerald Ash Borer.

For me, though, what the wasps have done is opened my eyes to how much is going on in just a few square yards of a pretty ordinary parking area.  In addition to our wasps collecting Jewel Beetles, one of its cousins is collecting Leaf Beetles and another is catching Weevils like a Weevil Wasp should.  Then there are Spider Wasps, and wasps dragging caterpillars through the dust, and wasps called Bee Wolves carrying hapless bees, and the giant Cicada Killers as big as hummingbirds gliding down from the Sugar  Maples with fat cicadas tucked underneath their bellies.  And each of these specialized killers has other insects like Velvet Ants (wasps, really, but called "ants" because the females have no wings) and Cuckoo Wasps and "kleptoparasitic" flies that are trying to steal all this food for their own young.  Standing in the hot July sun, net perched on my shoulder, I never tire of this parade of life as it hums and buzzes all around me.

* * *
Images used with the permission of Philip Careless, Micheal Bohne and Jeffrey Zirlin.

Dolphin Rescue! The Animal Video of the Day!!!
Comments