Earlier this month a woman traveling through Chicago's O'Hare airport
got the surprise of her life when she just happened to discover an
alligator beneath an escalator. She went to tell a maintenance worker and at first
they 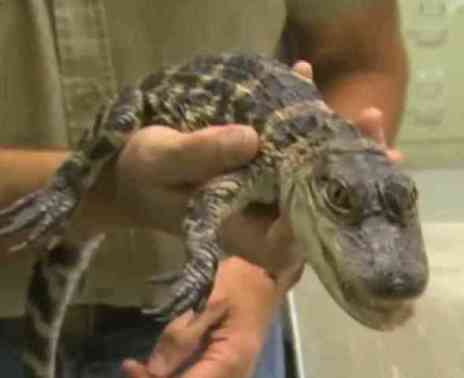 Allie the alligator in safe hands (You Tube Image)thought she was playing a prank. On investigating the report they
found that there was, indeed, a small alligator about two-feet long
hiding under an escalator in Terminal 3. He was cold and alone.

The police were called and a responding officer captured the creature by putting a trash can over it. The gator was collected by being swept into a dust pan. Talk about being treated like garbage! But things got better for him from there.

The gator had reportedly been seen on the Chicago train, known as the El, where a woman had brought it on board. According to security video and eyewitness accounts, the woman had let other people handle the reptile. One man Tweeted pictures of himself with the animal which led authorities to start checking security footage. 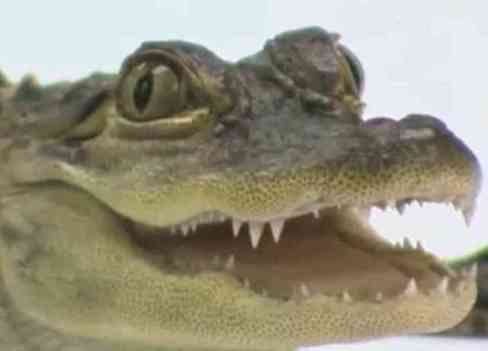 Allie the alligator (You Tube Image)There has been a great deal of speculation on why the woman abandoned the animal. Some think that she may have realized that she wouldn't be able to get it through security, while others theorize that she didn't know how to care for it and left it where someone would find it.

The alligator, now named Allie, is in the care of the Chicago Herpetological Society. It is not known whether or not it will survive the experience. It was showing signs of having been kept in the cold and of receiving poor care.

The woman is being sought and faces animal cruelty charges, as well as charges for keeping wildlife. It is illegal to keep wildlife in your home in the state of Illinois. Even with this law in place, there are people who insist on trying -- much to the detriment to the animal.

European Football -- The Animals Versus Humans Video of the Day!!!
PetsLady's Pick: Amazing Trolling Gator Of The Day
Did You Know Crocodiles Enjoy Fruit Snacks?

2 Men Charged With Stealing $40,000 Worth Of Exotic Reptiles!
Comments