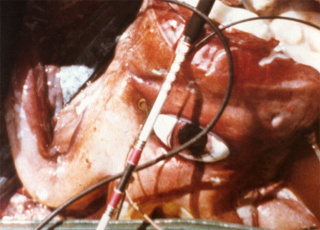 Giant squid eye: image via wired.com Who knows what Little Red Riding Hood would have said had she been eyeball to eyeball with a giant squid instead of a fox. Staring into a 10-inch eyeball might have just caused her immediate demise.  But not so an international group of biologists who stared into the laboratory's giant squid eyes to find out just why the squid's eye was so darned big.

In a research study, published March 15, 2012, in the online edition of Current Biology, the scientists wrote of their discovery and what it might mean to the future of underwater sight technology.  Their studies led them away from theories that the eyes of colossal and giant squid evolved for mate-finding purposes, as with some other species, but that the evolution took place for survival purposes.

Studying the eyes of comparative sized animals (a giant squid can be up to 43 feet long), the researchers found that the larger eyes received more light, enabling the giant squid to see small contrast differences under the murky conditions of the pelagic waters in which they swim. The researchers built a computer model based on this theory, which they expect to provide them with information valuable to creating better underwater surveillance technology, what the U.S. Navy hopes is a "new era of sonar technology."