Agoraphobia: Dog Terrified Of Going For A Walk

Sam, a black Labrador retriever in Aberdeenshire, Scotland was once a
normal, happy dog who couldn't wait to go for a walk -- just like any
other dog. Then one day, while he was out for a walk and checking out
all of the 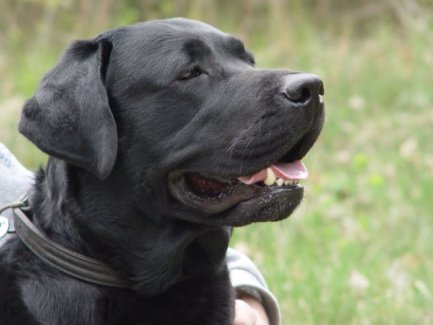 Black Labrador Retriever (Photo by Hanna Dworniczak/Creative Commons via Wikimedia)different sniffs in the neighborhood he received a serious
electric shock through his paws when he touched a metal
drain.

The drain had an electrical charge running through it due to a fault with the power being supplied to a nearby street light. Sam's owner, Donna Simpson, was just taking him for his usual walk when he suddenly jumped off the sidewalk into the street, and went crazy.

Sam was apparently not the first dog to have received a shock from walking along that stretch of pavement. While the problem between the pipe and street light has been fixed, Sam's problems are not so easily remedied. The poor pooch is now terrified of even the mention of going to a walk. Simpson has to drag him around the streets of Stonehaven to get him to go anywhere. Her two small sons are desperate to have their loving and playful dog back.

For a while after the incident Sam was on medication. Now that he has finished his medication he is worse than ever.  His official diagnosis is agoraphobia, a serious anxiety disorder that seems to most often appear as a fear of public places or open spaces.

Dogs and cats as well as humans can suffer from a wide range of psychological disorders, and often have the same or similar triggers. Agoraphobia is extremely rare in dogs.

Getting Snooty Has Never Been So Cute!